Posted at 20:24h in Christmas, Gingerbread, ration-era recipe, Rationing, recipe, Recipes, Uncategorized, WWII Rationing by admin 0 Comments
0 Likes
Share
Since this is my first post in December, I thought it would be appropriate to feature a Christmas-themed ration recipe.  I returned to the Spry cookbook and found a suitable recipe for gingerbread.  In keeping with the spirit of rationing, the recipe called for only a half cup of sugar and relied on molasses as the primary sweetening agent.  (Molasses, along with corn syrup and honey, were often used as substitutes for preciously rationed sugar.)
This reminds me, I haven’t given y’all a proper lesson on World War II rationing!  In a nutshell, rationing was a system implemented by the government.  It existed to give all Americans equal access to goods that were in short supply due to the war by limiting the number of certain items people could buy.  Items like food, gasoline, shoes, and clothing were rationed in the U.S. during the war since these things were now needed to feed, dress, and equip our servicemen and women.  Meat, sugar, butter, and canned goods were some of the most heavily rationed food goods, and substitutes for them suddenly became much more popular – think molasses, honey, SPAM, oleo margarine…  Cooks also began adapting their recipes to accommodate rationing limitations – hence, the gingerbread recipe found here.
Back to the recipe. Honestly, as I followed the recipe, I had no idea what to expect of either the taste or form of this supposed future gingerbread.  (I typically think of gingerbread as a cookie shaped like a cute little person, not something you get out of a baking dish.)  If you look at the pictures below, the gingerbread came out with a shape and texture similar to a brownie.  But don’t be deceived.  Sadly, no chocolate was harmed in this experiment.
Although the process was surprising, the results were delicious! 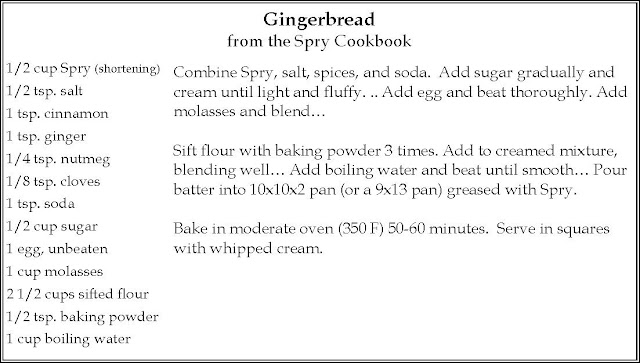