Posted at 13:57h in Uncategorized by admin 0 Comments
0 Likes
Share
During the winter months, we try to offer patrons indoor opportunities to expand their knowledge of WWII history through our lunchbox lecture series.  This winter we have several programs planned, and I will be giving y’all a sneak preview of what’s coming in future weeks.  The first lecture in the series takes place next Wednesday, Jan. 18th at the Bedford Area Welcome Center at noon.  Our director of education will discuss the daring story of the Rochambelles: the only women’s group assigned to a combat unit in the European theater. 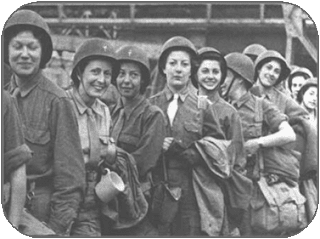 So here’s a breif background on the Rochambelles to whet your appetite…
The Rochambelles served under the French General Leclerc’s famed Second Armored Division.  In July 1944, they crossed the English Channel to Normandy and worked tirelessly to save soldiers’ lives by providing an ambulance service that lasted until the end of the war.  They were among the first to enter Paris in August 1944 during the liberation and from November to February 1945, the Rochambelles assisted soldiers at the front line at Strasbourg, Erstein, Lorraine, the Colmar Pocket, and Grussenhein. 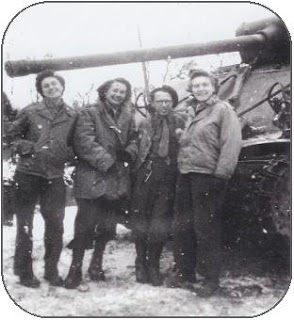 The Rochambelles faced constant danger.  Driving ambulances at night without proper directions or the use of headlights, in territory that constantly shifted hands, proved treacherous throughout their time in Europe.  Mortars, shrapnel, and machine gun fire were everyday occurrences – not to mention the other horrors of war.  At the end of the Alsatian campaign, one of the Rochambelles’ remaining ambulances had thirty-nine shrapnel holes.   Miraculously, only one Rochambelle was killed during the war; however, one went missing and was never found and six were wounded.  By the end of the war in Europe, the Rochambelles were held in high esteem by their comrades and considered invaluable to the division even though they initially faced resistance.
So if you’re in the Central Virginia area, we hope you can join us next week!  Admission is free, but donations are always appreciated.  For more information, please visit our website at www.www.dday.org.
-Megan
References:
Hampton, E. (2006). Women of valor: The Rochambelles on the WWII front. Palgrave Macmillan: New York, NY.