Posted at 16:31h in potato soup recipe, ration-era recipe, Rationing, recipe, Recipes, Uncategorized by Angela Lynch 0 Comments
0 Likes
Share
This past Monday in Central Virginia was a dreary, cold, rainy day – perfect for a bowl of steaming soup.  So I decided to turn to the trusty “ABCs of Wartime Canning” cookbook for a ration-era inspired meal.  I found just what I was looking for under the low-ration points category: Creamy Potato Soup.  Perhaps one of the most enticing aspects of this recipe was that I had everything I needed in my pantry to put the meal together.  Also, this recipe was very budget-friendly and took less than 30 minutes to prep, cook, and serve.  Clearly, you can see that I was quite impressed with all aspects of this culinary experiment.
The only real prep work involved with the recipe was peeling and thinly slicing five potatoes and an onion.  The rest of the steps involved dumping ingredients in the stock pot and stirring contents together.  If you decide to test this recipe out yourself (which I sincerely hope you will), don’t be deceived by the potato to water ratio.  I seriously contemplated adding more water than the recipe called for so that all contents in the pot could be covered.  Thankfully I resisted my urge, and the results came out beautifully.  The potatoes and onions cooked down nicely and made the liquid thick and starchy.  Then the addition of flour and milk further enhanced the creaminess of the soup. 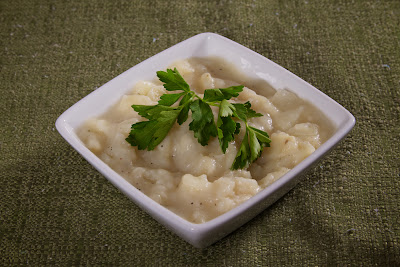 My only complaint with this recipe was that it was far to bland.  After I tasted the initial results, I liberally added more salt and pepper, and I even threw in some chili powder to kick the flavor up a bit.  The end result was delicious.  This could easily become a go-to meal in our house since it was so easy, cheap, and tasty. 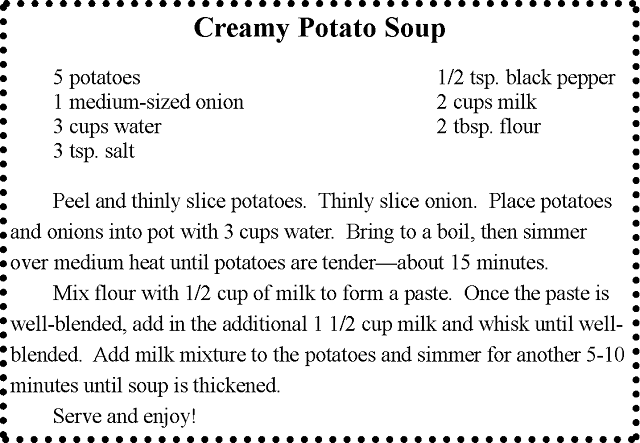