Posted at 17:08h in ration-era recipe, Rationing, recipe, Recipes, Uncategorized, Whipped Cream Recipe, WWII Recipe by Angela Lynch 0 Comments
0 Likes
Share
So our busy season has officially started at the National D-Day Memorial, and we’ve been running around like crazy people these past few weeks making sure that everything is in ship-shape for our visitors!  So the poor blog has felt a little left-out and perhaps even a tad neglected, so I decided to make things right by featuring a ration-era recipe this week.
I chose a very simple recipe from the ABCs of Wartime Canning that took very little time to whip up.  (Remember, I said its our busy season.)  I also thought this recipe would provide a perfect compliment to all of the refreshing springtime desserts that seem to crop up this time of year.  The recipe is for faux whipped cream.
The prep time for the recipe was minimal, but it did need to sit in the refrigerator for at least an hour to set up, so if you’re brave enough to test it out, you may want to keep that time frame in mind.  What made this recipe so phenomenal is that it transforms average table cream into a light, fluffy dessert topping. So here’s what you need for the faux whipped cream: table cream (I used a pint of light cream), plain gelatin, water, and vanilla (if necessary).
Here’s what you do:
1. In a small cup, place 2 tsp. plain gelatin into 4 Tbsp. cold water
2. Set the cup with the gelatin mixture into a shallow bowl of hot water.
3. Stir the gelatin and cold water until it dissovles 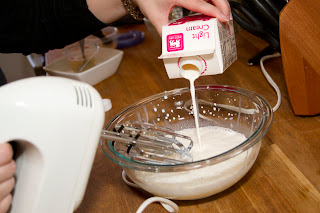 4. Pour one cup of cream into a medium-large bowl 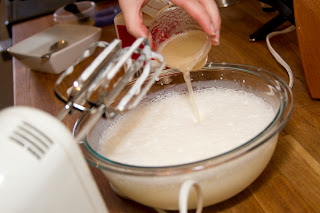 5. Slowly pour the gelatin mixture into the cream 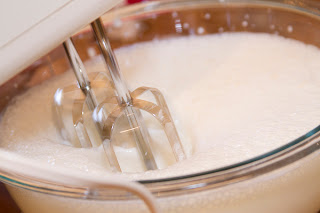 6. Using an electric mixer, beat the cream on high until it thickens a little
7. Add vanilla and/or sugar if desired
8. Place mixture into the refrigerator and let set for at least an hour
9. Serve! 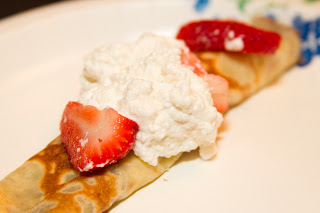 I took a big risk and prepared the whipped cream on a night that company was coming over.  My unsuspecting company never knew I used a ration-era whipped cream recipe for their crepe topping.  In fact a few people even commented on how delicious the “homemade” whipped cream was.  So, I guess we can consider this recipe a success!
Enjoy!
Megan