The next few days and weeks here at the Memorial are very busy and exciting times, but they are also very solemn times.  The D-Day Memorial, like many other sites around the country, will host a special ceremony on Memorial day to remember the nation’s fallen; and while it is not a national holiday, we also host another commemorative event on the 68th anniversary of D-Day on June 6th.  In honor of the solemnity of the next few weeks leading up to these events, we will feature a few stories of fallen D-Day heroes on our blog.

I would also like to extended a huge “thank you” to our summer intern, Kaitlin, who compiled the information and drafted the text for this post on James Burns. 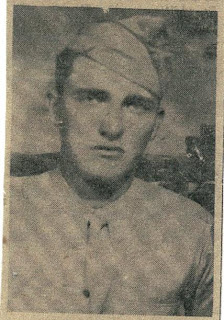 James Franklin Burns was born on July 23, 1923 in Hamilton, Texas.  Before WWII broke out, he worked on his family farm after completing an 8th grade education.  On January 15, 1943, James received his draft letter, and by 1944 PFC James Burns was a bona fide member of the US Army’s 146th Combat Engineers.

The 146th found themselves in England preparing for the impending invasion of France.  The night before the D-Day Invasion James spoke with a friend, Carroll Guidry, and made the remark that he did not think he would make it through the invasion.  Guidry brushed off the comment and thought nothing of such a dark premonition.  On the first day of the invasion, the 146th was tasked with removing obstacles in the sea and on land.  While working towards their objective on the beach, a sand dune collapsed burying men from the 146th battalion including James Burns.

Guidry watched in horror as the dune collapsed then rushed in to help others dig men out of the sand.  While most of the men were rescued from the disaster, James remained unaccounted for.  Soon enough, someone standing in the sand pile felt something beneath the surface and started digging; it was James Burns.  Sadly, James’ premonition proved true as he died that day in the sands of Normandy.  Carroll Guidry recalls laying next to the body of his friend, James, and cried as the battle raged on.  PFC Burns was the only causality from this collapsed sand dune. 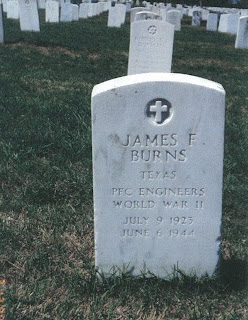 James Burns was initially buried in the first cemetery along Omaha Beach, but upon request from his parents, he was later laid to rest at Fort Sam Houston National Cemetery in San Antonio, Texas.  James’ commander also sent a letter to the Burns family praising James for his valor and commitment to duty regardless of circumstance.  Years later, at the 50th Anniversary Commemoration in Normandy, William Burns, James’ younger brother, accepted the French Freedom Medal on his older brother’s behalf.