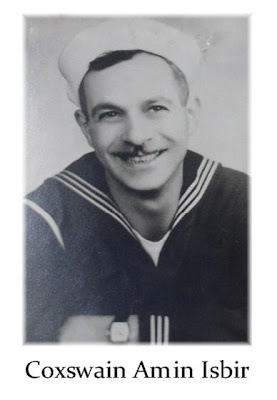 For over eight years, Eric Montgomery has been on a mission to close the final chapter of his great uncle Amin Isbir’s  D-Day story.  Coxswain Amin Isbir, a member of the 6th Naval Beach Battalion, was reported killed in action on June 8, 1944.  Montgomery questioned his date of death believing that he had been killed in action on D-Day, June 6, 1944.  Isbir’s commanding officer, Ensign Joe Vaghi, confirmed Montgomery’s suspicions.
Onboard  Coast Guard operated LCI-L 88, Amin and his Company C8 shipmates were being transported along with members of the 5th Engineers Special Brigade and 1st Infantry Division soldiers to the Easy Red One sector of Omaha Beach.  During the landing, the ship came under heavy fire, losing one of its two ramps along with a number of the soldiers from the Big Red One.  Beachmaster Vaghi and Isbir were some of the first men down the remaining port side ramp.  A short time later, as they were placing a fallen soldier onto a stretcher, a shell from a German railway gun five miles away landed onto the beach hurling a jeep into the air.  The jeep landed on Isbir killing him instantly.  Ensign Vaghi was knocked unconscious from the blast.  Due to continued hostilities, Isbir’s body was not recovered until two days later and his death was listed as June 8, 1944.   Isbir was posthumously awarded the French Croix de Guerre for bravery and the Purple Heart.
Isbir’s tombstone in the Normandy American Cemetery and military records listed his date of death as June 8.  Since his death was recorded as June 8, the National D-Day Memorial Foundation did not include him on the Memorial Wall after its initial research (as the Foundation only researched and recorded June 6 fatalities).  In 2009, 65 years after Isbir’s death, Montgomery was able to present the American Battle Monuments Commission with substantial evidence to replace the misdated stone with a corrected one.  During the 2012 D-Day Commemoration Ceremony, the plaque containing the addition of Isbir’s name will be officially dedicated to the Memorial Wall at the National D-Day Memorial.
The National D-Day Memorial has confirmed 4,413 Allied fatalities on June 6. Of that number, 2,499 were Americans. The National D-Day Memorial Foundation is the only institution in the world to research the name of every soldier, sailor, airman, and coast guardsman killed on June 6, 1944.