This week we have a special guest blogger, my colleague and fellow educator, Felicia Lowrance. 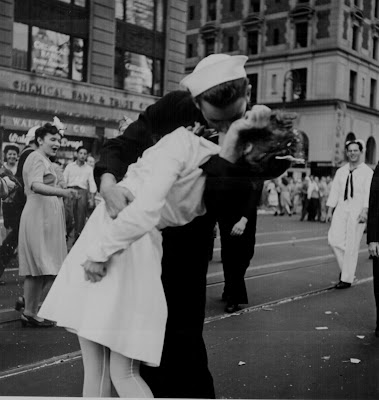 With Valentine’s Day coming up on Thursday, we thought it would be appropriate to write about love in wartime.  After thinking about this topic for many days and reading a lot of letters written by women to their significant others during the war, it was something that I overheard yesterday at our lunchbox lecture with a few veterans that really stood out and prompted my writing.  A guest asked one of the wives of a D-Day veteran if they were married before he went off to war.  Her response went something like this:  “Oh no!  We lived on the same street but he thought I was just a silly teenage girl.  I won him over through the mail.  The farther away he got, the better I became.”
This made me think about courtship during the war.  Many young couples were separated as the men went to fight in the European or Pacific theaters, and letter writing became the main form of communication.  In their book Since You Went Away: World War II Letters from American Women on the Homefront, Judy Litoff and David Smith have complied letters written by women to their sweethearts, husbands, sons, fathers, and sometimes even (as in the case below) to men they had never meet but were asked to write to by a family member.  Relationships that would be fostered through dates and talking, now had to be fostered through the use of letters.  The letters in this book may only show one side of the conversation but through them we can read descriptions of daily life, what women on the homefront thought about advancements the troops were making, and how love was fostered during WWII.
This letter was written on June 6, 1944 by Barbara Sanz.  Her brother convinced her to write letters to his buddy Lester “Mac” McClannen, a cryptographer in the Army Air Corps stationed in England.
Dear Mac,
Now I understand why I have not heard from you.  The “Day” has come.  I can’t explain the feeling I had when I first heard of the Invasion.  I heard it when I walked in the [beauty] shop this morning, I was stunned.  We all knew it was coming and were happy that it is started, so it can all end soon.  When it actually happens it’s a shock. It was such a gloomy day, rained all day. That didn’t help much. We had the radio going all day. The President gave a prayer tonite that the nation was to join.  Believe me, when I say I put my whole heart and soul in that prayer and will continue to pray knowing that you and the other boys have help and come out on top. And as for you especially, Mac, do take care of yourself. I am still anxiously waiting to meet you and will keep on waiting. You must promise me your “first date.” Or am I being selfish? Then you can see your “other girls.”
Everyone was so quiet today. It’s a day that I’ll never forget. It was like the day War was declared. That was also a gloomy day. I hope you will still receive my letters. I will write as often as I can. I know letters mean so much to you boys. Wish I had time to write everyone of them…
It’s so cold here again I had to build a fire tonite. It was so comfy in the house tonite and I was wondering how “comfy” you are. It almost makes you feel guilty when you’re enjoying the comforts of home and thinking of the hardships you boys have.
There isn’t must more I can say to you to you tonite, Mac, I just don’t feel real cheery tonite, although I hope I’ve cheered you up a little by letting you know I’m thinking of you and praying for you.
God Bless You, Barbara[1]
By October 1944 and into the early months of 1945, letters were being signed with “sweetheart” and “love.”  One month after Mac’s homecoming in August of 1945, Mac and Barbara were married.
– Felicia
[1]Litoff, Judy Barrett and David C. Smith. Since You Went Away: World War II Letters from American Women on the Home front. Lawrence, Kansas: University Press of Kansas, 1991. 45-47