23 May Preserving D-Day: When Time Stopped

Posted at 18:27h in Uncategorized by admin 0 Comments
0 Likes
Share

Because the Memorial currently lacks an indoor museum component, most visitors don’t know about our archives and the artifacts we house in it.  But the Memorial has hundreds of artifacts in its collection that help us paint a more clear picture of the Normandy Invasion.  And that is what is so wonderful about artifacts – they help tell the story of history.  Artifacts provide visual clues and insights to historical events, and they often allow us to see a more personal side of history.  This is particularly true of the artifact we’re featuring today.  **I’d also like to give special thanks to Hugh, a dedicated Memorial volunteer, for compiling the images and information for today’s post. 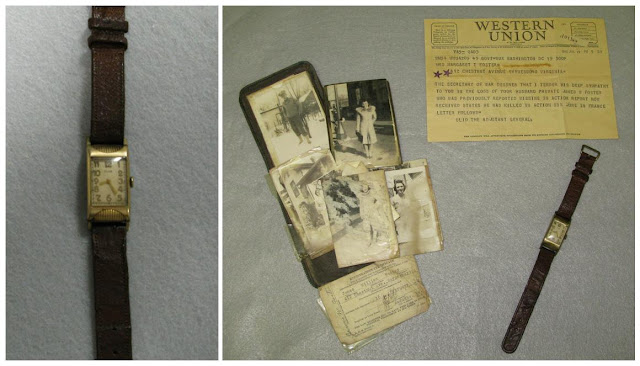 To the untrained eye, the piece on the left may just seem like an average wrist watch.  But in reality, it is much more than that.   The Elgin watch in the photo belonged to James Foster, a member of the 379th Anti-aircraft Artillery Provisional Machine Gun Battalion of the 49th Anti-aircraft Artillery Brigade.  Foster’s battalion was involved in the D-Day invasion, and sadly, James Foster was killed as he exited his landing craft wading ashore at Omaha Beach on June 6, 1944.  It is believed that Foster’s watch stopped at the exact time of his death on D-Day.

The watch along with his leather billfold (seen in the photo on the right) were returned to James’ wife Margaret in March of 1945.  The contents of the billfold, although water damaged, included such personal items as photos of his wife, his draft card, and his Virginia driver’s license.  James Foster’s body was brought home to Waynesboro, VA after the war – his final resting place is Riverview Cemetery.  Foster was Waynesboro’s only D-Day fatality. 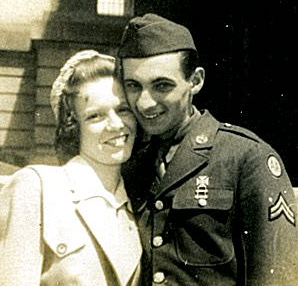 These items, along with the original Western Union telegrams (notification that he was missing-in-action and the subsequent notification that he had been killed-in-action) and also other official letters from the War Department were donated by James Foster’s niece, Joyce DeWitt.

The Memorial looks forward to the day, hopefully in the near future, where these priceless objects can be displayed for all of the public to see in a physical setting.  But until then we will continue to use the blog as a virtual museum of sorts to let the artifacts tell the important story of D-Day.  Be sure to look back soon to learn more about our collection.
– Megan