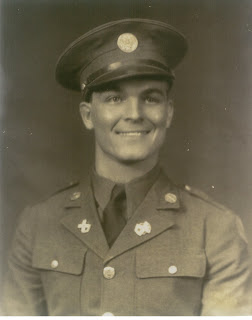 In 1944, Bedford, VA was a small, close-knit community of around 3,400.  On the morning of June 6, 1944, thirty-four men from this small town led the assault on Omaha Beach as part of Company A of the 116th Infantry Regiment 29thInfantry Division.  Thirty minutes after landing, 19 of 34 men from Bedford had been killed.  Twenty-five year old Tech Sergeant Frank P. Draper was one of those men.
Born on September 16, 1918 in Bedford, Draper’s family home was close to the railroad tracks.  During the winter, he collected coal that fell off of trains to help keep his family warm.  His younger brother David described him as a happy-go-lucky guy who sang in the choir, never drank or smoked.[1]  And at Bedford High School, Draper was a star athlete in baseball, basketball, football and track.

After graduating, Draper worked in textiles and continued to play baseball on two separate teams: Mud Alley and Hampton Looms.  At Hampton Looms, the area’s largest employer, he was centerfielder and lead-off batter.  Frank’s two younger brothers played on the Hampton Looms team with him – batting one, two, three.  David recalled “My mother and father hadn’t wanted us to play because they didn’t want us to get hurt.  But we did anyway.  We called Frank ‘Piggy’ because when we were real young he would jump on the back of pigs and ride them like they were a horse.”[2]
Frank joined the National Guard in February 1941 under President Roosevelt’s 1940 Selective Service Act.  Under this act he would serve in the military for one year.  However, with the attack on Pearl Harbor, Draper was in the military for the duration of the war.  In the military, Draper was known for being resourceful, calm, decisive under pressure, and organized.  He kept a journal detailing his duties and responsibilities, and quickly attained the rank of sergeant. 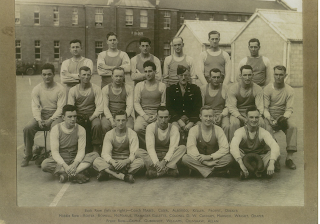 Even in the midst of training, Draper still found time for baseball.  In September 1943, he and three other Bedford men were on the 116 Infantry Regiment Yankees that competed in a 20 team ETO World Series in London.  The teams played 4 games in 4 days at the Eighth Air Force Headquarters.  On September 30th, the 116 Yankees defeated the Fighter Command Thunderbolts 6-3.  The October 1, 1943 edition of Stars and Stripes reads “They [116 Yanks] rallied again in the seventh, Sergeant Frank Draper, of Bedford, VA, getting his second triple of the game, but was out at the plate trying to score when PFC Joe Gubernot, or Shamokin, PA, hit to second.”[3]  Clearly baseball offered a fun, meaningful distraction from the war for Frank Draper and many men like him. 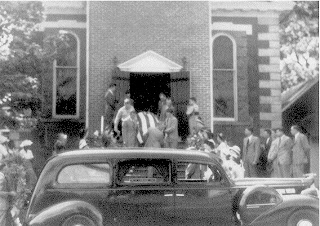 Then came D-Day.  On the morning of June 6, 1944, Draper made a few last notes about what he needed to do for the invasion noting the time he was supposed to hit the beach.  Sadly, Frank Draper never quite made it to the beaches that morning as he was killed by enemy fire while still on his landing craft.  Draper’s body was eventually returned to Bedford in 1948.  His formal funeral service was held on July 24, 1948 at Bedford Christian Church with burial in Greenwood Cemetery.