June has certainly been a busy month around the Memorial, and July promises to be equally active!  After our Memorial day weekend events, we hosted a commemorative ceremony for the 69thanniversary of D-Day, a Father’s Day event, and a high energy, 3-day day camp for nearly 30 students!  But we survived and are now gearing up for our annual Family Day Event scheduled for Saturday, July 20th.  Whew!  So, if you need my excuse, then that helps explain why the blog sometimes gets neglected this time of year…
So, back to the task at hand – this week we’re returning to our collection to examine a set of artifacts both directly related to the invasion.  The first is an assault vest given to the Memorial by John E. Hornberger.  The second artifact is an M1926 Lifebelt given by the 29th Infantry Division Historical Association which was recovered from the sands of Omaha Beach.
The Assault Vest 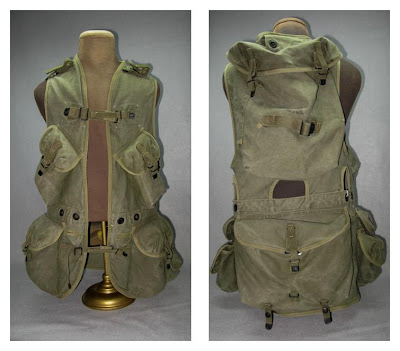 The Assault Vest was developed quickly for the D-Day invasion.  It was modeled after an assault Jerkin used by British commando units.  The American vest had a number of pockets to allow a soldier to carry all of his equipment without having to carry a separate pack and multiple equipment bags.  On D-Day it was issued to some of the initial assault units and to some men of the 2nd and 5thRangers.  Only about 14,000 vests were ever manufactured.  The Army did not adopt them as standard equipment for ongoing use after D-Day.
The vest met with mixed reviews on the part of users.  Many found the vest fit poorly and was too hot and heavy with poor weight distribution. The lower pockets of the vest below the waist hampered movement.  Most soldiers preferred the M-1928 pack and individual special equipment bags worn independently or attached to their web belts.  Most vests were discarded as quickly as possible or cut off at the waistband.  In general the assault vest was unsuccessful and not issued again.  It is, however, a unique part of the D-Day story.
The M1926 Lifebelt 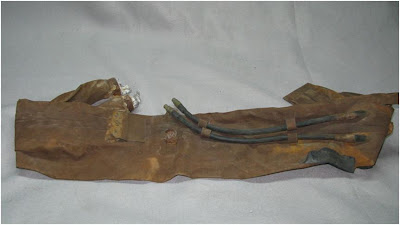 The M1926 Lifebelt was issued by the Navy to all assault troops participating in D-Day.  The belt had two inflatable tubes which could be inflated by two co2 cartridges or by mouth blowing into the two black tubes.
Though called a lifebelt it was not intended to be worn around the waist, but rather as high as possible under the armpits.  Because of the weight of the equipment carried by the troops, if the belt was worn at waist level top heavy troops would be turned upside down and drown.  This tragically happened too often.