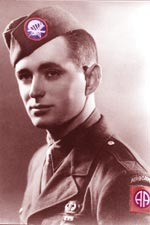 Charles Percival Blankenship was born on October 12, 1919 in Rock Hill, SC and grew up in Buncombe County, NC.  Eldest son of Bernard & Margaret Blankenship, Charles had four brothers and two sisters.  Charles enlisted in the US Army on September 12, 1940 in Charlotte, NC.  His enlistment record notes that he had four years high school education and “unskilled occupations in manufacture of textiles.”  He stood at 6’1” and weighed 150 pounds.  When the 82nd Airborne was formed in 1942, Charles volunteered for service with the “All-Americans.”  After rigorous training at Fort Benning, Georgia, he left for Europe as part of F-Company, 505th Parachute Infantry Regiment (PIR).
Prior to D-Day, Charles made combat jumps in Sicily as part of Operation Husky.  In December 1943, F-Company was located to Belfast in Northern Ireland for a three month stay to prepare for the D-Day landings.  It was here that Charles met Lillian Forbes.  They had a fast relationship and were engaged prior to Charles leaving; however, they decided to hold off on the wedding until the end of the war.

Charles jumped into St. Mere-Eglise in the early morning hours of June 6, 1944.  Charles landed in the town square and was killed immediately.  Twelve men of F-Company were killed, wounded, or captured as they parachuted into the town square.  By the end of the day, St. Mere-Eglise was the first town liberated on D-Day.  F-Company, as well as all the other American paratroopers, are remembered in St. Mere-Eglise through a number of memorials–including a paratrooper (John Steele) hanging off of the church steeple. 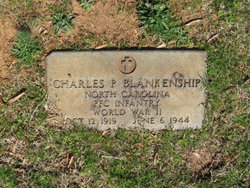 Charles was buried in Cemetery 1 in St. Mere-Eglise.  His family was notified by Lillian that Charles had been killed in action after reading his name on a casualty list.  In 1948, his father requested to have his body returned to the United States for burial in the family cemetery in Rock Hill, SC – a ceremony that took place on June 5, 1948.  Two other Blankenship sons were involved in WWII:  Bernard Jr. was in the Army Air Corps in the Pacific and John served in the Navy toward the end of the war.