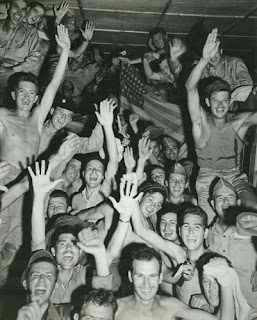 Thanks to you, we have over 10,000 views on Sentimental Journey.  I want to take this opportunity to say THANK YOU to all of you who spend time reading the short articles that we put up each week! I also want to say thank you to everyone who serves as the sounding board for new article ideas and as editors from week to week.  I hope you enjoy reading these articles as much as I enjoy writing them.  Last week, I had an educator ask why I chose to work in this field.  My response was simple – I love presenting history to the public.  This blog has been another way that I can explore the millions of different veins we have to study WWII and D-Day, and bring that history to life for the public.
As a treat for reaching this milestone, I present Donald Duck in The Vanishing Private.  Produced by Walt Disney in 1942, this cartoon was one of many that presented a lighter side to the conflict that the United States had officially entered in December 1941.  Movie shorts like this one would have been seen prior to the feature film, and in the 1930s/1940s Donald, not Mickey, was the star of the Walt Disney Company.  Early next year, I will be doing a lecture on the many different Disney cartoons produced over the course of the war and the effect they had on the public psyche.
Once again, I want to say THANK YOU and I hope you enjoy Donald Duck in The Vanishing Private!
See you next week!
~Felicia