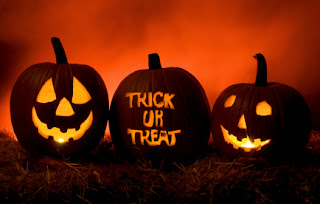 Halloween is one of my favorite times of year.  I love the pumpkins, ghost stories, and chill in the air.  You may be thinking how does this relate to World War II?  Well, let me tell you.

Prior to World War II, trick or treat took on a different meaning.  Tricks used to be played by children and young adults through the neighborhood as a way to celebrate the night.  With the involvement of America in World War II, many things changed very quickly on the home front.  First, sugar was rationed.  All those delicious candies that we like to get on Halloween was now a non-necessity.  They cost too much to spend the precious ration points on.

Secondly, there was a real fear throughout the communities in the United States that with the men away, the children would take the tricks father then usual.  The year 1942 saw the United States in full war production mode – men were in uniform, women were in the factories, and everyone was doing their part.  With adults dealing with the war, children were left to their own devices (when they weren’t helping with community projects).  There was a fear that with everyone focused on the war effort, children would run rampant on Halloween.  Many communities canceled the holiday altogether.

However, a few families banded together to throw a neighborhood Halloween party.  Costume parties, dances, and other activities were used to lure children into a safe, supervised environment.  The costumed Halloween and trick-or-treating that we know today is steeped in the traditions that were established during World War II.

Enjoy yourselves this Halloween!