12 Nov Remembering Our Founder: A Tribute to John Robert Slaughter 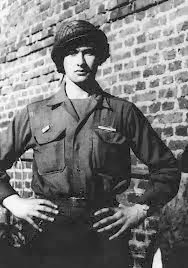 Mr. Slaughter entered the service in 1940 at the tender age of 15 (after convincing his parents that he wanted to join the National Guard and earn extra money for household expenses).  By the age of 19, he found himself engaged in the largest amphibious assault in history on the beaches of Normandy, France.   Bob served with Company D, 116th Infantry Regiment, 29th Division.  Company D was a heavy weapons company that supported rifle companies in combat.  Slaughter was wounded twice while in France and was discharged in July 1945 at which point he returned to his home in Roanoke, Virginia.  He married in 1947, and he and his wife Margaret had two children.  Over the years, however, memories of what took place on that stretch of sand in Normandy continued to haunt him.
In 1987, Bob Slaughter declared “We have no gathering place, no meeting hall, no memorial, where our country can collect its memories and the lessons we learned from D-Day.”  Shortly thereafter, Slaughter, along with several other supporters, formed a committee to raise money and search for an appropriate location for a small memorial.
After visiting Normandy on several occasions, the vision for a memorial took shape and in 1989, Slaughter’s small committee introduced a seventeen-member board of directors.  The committee faced a series of challenges and a discouraged board was near disbandment when a resurgence of interest in D-Day, due to the 50th anniversary in 1994, led to increased publicity and new momentum.
Shortly thereafter, Bedford City officials donated eleven acres of land to the D-Day Foundation for the site of the proposed memorial and an additional seventy-seven acres was purchased by the Foundation to protect the site from further development.

Mr. Slaughter served as the Foundation’s Chairman from 1994-2001.  Congress also adopted legislation designating the site a national memorial in 1994.  The Foundation hired its first employee in 1996 and the Memorial was officially dedicated by President George W. Bush on 6 June 2001.

In 2007, Bob authored Omaha Beach and Beyond, an auto-biography, chronicling his wartime experience and the creation of the Memorial.  In 2008, The John Robert Slaughter Youth Learning Center (an authentic military hands-on history tent) was dedicated at the Memorial.  That area has always been and continues to be the hub of the Foundation’s education initiatives.
Bob Slaughter was a very special man and one who was respected and admired.  In his book in 2007, Bob noted “Now that I am in my eighties, I am well aware that the long march that began so many years ago is about to come to a halt.  I am proud to say my generation helped save the world from tyranny, prevent the extinction of an entire group of people, and preserve the democratic freedoms of our wonderful American way of life.  I wouldn’t change a thing, except to wish that my dear army buddies could be here to see and touch the magnificent National D-Day Memorial that was built for us all.”
While Bob is deeply missed, his legacy is preserved in perpetuity at the National D-Day Memorial.  We look forward to raising funds for the bust and accompanying plaque that will tell his story.
How You Can Help?
Spread the Word!
Make a donation or encourage others to donate.
Click here to make a donation to support the portrait bust of John Robert Slaughter.
Click here to download a brochure to mail in your contribution.
Lastly, I would like to say thank you to everyone who came out yesterday to honor our nation’s veterans.  It was a beautiful day and a wonderful ceremony as we came together to honor the servicemen and women who defend and protect our country.
Until next time,
Felicia