26 Nov Entertainment of the 1940s: Casablanca 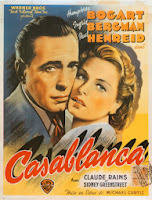 Honestly, I have been sitting trying to figure out what information I could bring to you my wonderful readers this week.  A recipe was my first thought, but then I ran off and left it on my desk which does not help me much since that is three hours away.  Next, I decided to research Thanksgiving during WWII.  In the midst of research I remembered that today, November 26th, is the 71stanniversary of the release of one of my favorite films of all time, Casablanca.

The initial release of the film was set for spring 1943; however, it premiered in New York City on November 26, 1942.  Timing of the release was changed to coincide with the Allied invasion into North Africa and the capture of Casablanca.  The film went into general release on January 23, 1943 (taking advantage of the Casablanca Conference).  Receiving consistently good reviews, the film became the seventh highest grossing film of 1943.  Screening of the film was prevented by the Office of War Information to troops in North Africa, believing it may cause resentment among Vichy supporters in the region. 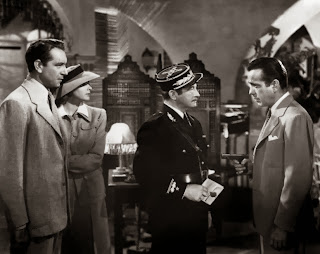 Bosley Crowther of The New York Times wrote, “The Warners…have a picture which makes the spine tingle and the heart take a leap.”  If you have seen the film, you know the twists and turns the directors take you on as you meet the varied clientele of Rick’s Café Américain in Vichy-controlled Casablanca.  American Rick Blaine, played by Humphrey Bogart, is the bitter owner of the nightclub and gambling den in Casablanca where much of the action takes place.  Ilsa Lund, played by Ingrid Bergman, walks in searching for Rick, her former love, to help her husband Czech Resistance leader Victor Laszlo, played by Paul Henreid.  Rick is placed in the difficult position of choosing his love for Ilsa or helping Victor escape from Casablanca to continue his fight against the Nazis. 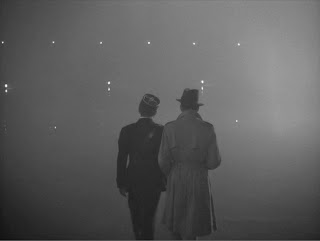 In the end, Rick works to ensure that Victor will be successful in his mission – ending the film by walking away with Louis, a police captain in Casablanca, with the iconic words “Louis, I think this is the beginning of a beautiful relationship.”
If you have never seen this classic, you should check it out.  For the 70th Anniversary next year, we will be having a viewing of Casablanca on the evening of June 6th.  We will be putting up more details in the coming months about this event and all events planned for the 70thanniversary.  For more information, check out our 70th Anniversary event tab on our website regularly! 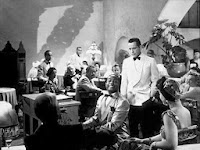