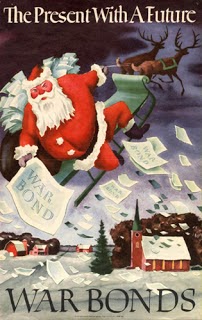 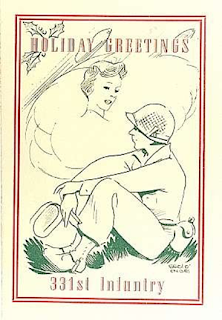 Happy Holidays D-Day Memorial followers! ‘Tis the season to rejoice in family and holiday cheer! Now more than ever, the American people know what it feels to be without some of their dearest family members during the holiday season. Fathers, mothers, sons and daughters serving in our military make the ultimate sacrifice when they chose to serve. Unfortunately, this means they miss their families during the holidays; likewise, the people they have left behind feel the pain of separation just as much. The same was said for people during World War II, even more so since they did not have the luxury of advanced communication technology. The home front was a different place than what we know today. Not only were the lack of communication hard on families, but also the lack of supplies and closely monitored rationing made it hard for people to celebrate the season the way they had for so many years. Here are some yuletide facts about Christmas on the home front during World War II.
Facts
-Like most other items, Christmas trees were in short supply during the war. Not because the trees were being massed produced into something useable, but because there were not enough workers available to cut the trees down. Also, there was a shortage of available railroad space to ship the trees across the country. Thus, the beginnings of artificial Christmas trees (American-made Visca trees of course).
– Just before American involvement in the war (1941), a family could buy a 5-foot Christmas tree for just 75 cents. Today, depending on the area, a 5-foot tree could set you back as much as $35. The cost of about 46 trees in 1941!
– We often do not think of this while decorating our trees, but many ornaments, especially at the time, were made with aluminum and tin, a highly rationed item. As a result, many families opted to make their own ornaments. Magazines would provide ideas and patterns especially designed for non-priority war materials, such as paper, string, and things found in your own backyard.
– Another interesting fact about ornaments at the time, many popular ornaments like hand-blown German-made ornaments, as well as exotic looking Japanese-made ornaments, were thrown away with the outbreak of the war in support of their soldiers. The Corning Glass Company, out of New York, started to make ornaments themselves in response to this occurrence.  Not only did the population feel better about using American-made decorations, but also Corning could make more ornaments in a minute than it would take a German glass blower in one day. 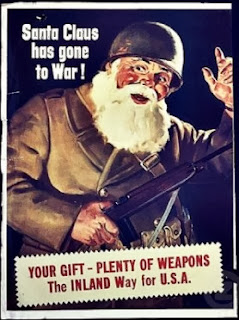 – The electric bubble lights were also designed in the 1940s and are still used today.
– Some people wanted a snowy look on their trees so their solution was to mix Lux soap powder with water and brush the branches with the concoction.
–  Another bit of information we tend to forget is who will dress up as Santa Claus if most of the men are off at war? Women stepped up to the plate, dressing as Santa Claus in department stores, like Saks Fifth Avenue in New York City.
– “I’ll Be Home For Christmas” and “White Christmas” were both written in the 1940s for the soldiers and quickly became popular as popular as they are today. 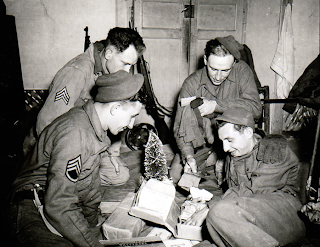 – People were limited on their travel plans because of rationing of tires and gasoline. Instead, families would save their ration stamps to have a nicer meal for the holidays.
~Elizabeth
Sources:
http://www.nww2m.com/2011/12/celebrating-christmas-on-the-home-front/
http://sarahsundin.blogspot.com/2011/12/christmas-in-world-war-ii-home-front.html
http://www.prweb.com/releases/2012/12WWIIChristmasVideo/prweb10259374.htm