14 Jan D-Day Through the Decades: 1954 Commemoration 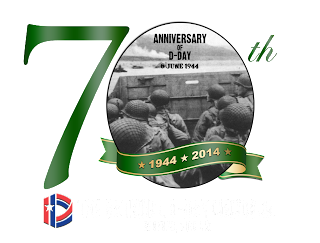 As we prepare for the 70th Anniversary, I wanted to start a new segment to look at the past anniversaries of Normandy landings.  We will begin with the 10thAnniversary of D-Day—6 June 1954.  World War II was over, the Cold War was in full swing, and the United States had just fought in the Korean War.  The 83rdCongress of the United States had worked at the urging of veterans service organizations to rededicate “Armistice Day” to “Veterans D  This act was approved on June 1, 1954—just a few days shy of the 10th Anniversary of the landings.

ay” in order to acknowledge and show support to all our nation’s veterans.

On June 6, Eisenhower, as President of the United States, released the following statement:
THIS DAY is the tenth anniversary of the landing of the Allied Expeditionary Force in Normandy. That combined land-sea-air operation was made possible by the joint labors of cooperating nations. It depended for its success upon the skill, determination and self-sacrifice of men from several lands. It set in motion a chain of events which affected the history of the entire world. 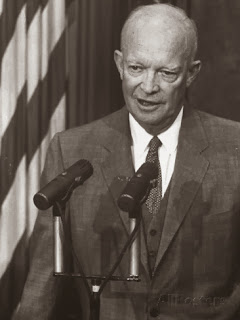 Despite the losses and suffering involved in that human effort, and in the epic conflict of which it was a part, we today find in those experiences reasons for hope and inspiration. They remind us particularly of the accomplishments attainable through close cooperation and friendship among free peoples striving toward a common goal. Some of my most cherished memories of that campaign are those of friendly cooperation with such distinguished military leaders of foreign nations as Field Marshal Montgomery, Admiral Ramsay, Marshal of the Royal Air Force Tedder, Marshal de Lattre de Tassigny, Marshal Juin and Marshal; Leclerc. I recall my pleasant association with the outstanding Soviet soldier, Marshal Zhukov, and the victorious meeting at the Elbe of the Armies of the West and of the East.
These lessons of unity and cooperation have by no means been lost in the trying period of reconstruction since the fighting stopped. Rather, we see peoples, once bitter enemies, burying their antagonisms and joining together to meet the problems of the postwar world. If all those nations which were members of the Grand Alliance have not maintained in time of peace the spirit of that wartime union, if some of the peoples who were our comrades-in-arms have been kept apart from us that is cause for profound regret, but not for despair. The courage, devotion and faith which brought us through the perils of war will inevitably bring us success in our unremitting search for peace, security and freedom.
Accounts from 1954 note that the ceremonies were discreet in Normandy.  You can view a short video of the commemoration ceremonies here: http://www.britishpathe.com/video/d-day-commemorated-in-normandy/query/DDAY+ANNIVERSARY. 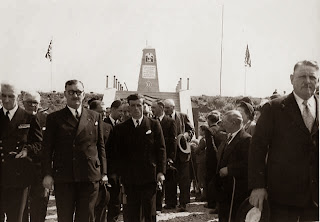 Below is an account from a Canadian media outlet on the tenth ceremony:

Hundreds of Victoria and Island war veterans this weekend will relive their experiences of a decade ago on the beaches of Normandy.  Sunday is the 10th anniversary of D-Day, when the massive power of the Western Allies’ three service arms joined to deal the first blow in a series that led to the smashing of Hitler’s Nazi Germany.

Face to face with the enemy for the first time under most fearsome conditions, the boys rose to great heights as they fought through to their first objective,” said Lieut.-Col. Desmond G. Crofton, 49, of Salt Spring Island.  Then a major, he commanded “C” Company, the first unit of Victoria’s “Fighting First” Battalion of the Canadian Scottish Regiment to storm the beachheads.

It was a costly action.

“Three hours later and three miles in, we had about 30 per cent killed and wounded,” said Col. Crofton.

When Gordon H. Hobson, 33, of Elk Lake, a flight lieutenant with RAF fighter squadrons, looked down and saw the great mass of shipping heading for France, he recalled “the wonderful feeling I got all over me.”

“It was a feeling of being unified with them, an uplift that pep talk could never inspire.

“I felt suddenly very big and very strong. For the first time in the war, I got the feeling that we were invincible,” said the Englishman who has been resident in Canada and Victoria for the last six years.”
Locally, Ray Nance, one of the Bedford Boys to return home, organized a memorial service in town on the 10th Anniversary to honor the memory of the 19 men lost by the community in the action on 6 June 1944.  He also helped secure the memorial stone given to the Bedford Boys in 1954 by the grateful people of France for the 10th Anniversary of D-Day.  Dedication of the stone occurred with a crowd of over 4,000 people.  Taylor Feller’s mother unveiled the memorial carved from the very care near Vierville sur Mer that served as the first command post for Major General Charles H. Gerhardt.

D-Day veteran Captain Edward Gearing, of Maryland,was in the crowd and stated “Company A was different from other organizations.  It was made up of ‘home town’ folks–fathers, cousins, etc.  Under these circumstances it is more difficult to see these men die and as difficult to return to the same community and resume the same way of life.”  Bedford survivors were present as were family members of the men who did not come home.

Just as in 1954, we will be honoring the memory of all the soldiers who fought on D-Day.  As part of the 70th Anniversary Ceremony, we will be unveiling a new statue on site to remember the sacrifice that our community, the town of Bedford, made on 6 June 1944.  We hope you join us for this monumental event as we honor the heroes of our past.

Be sure to stay up-to-date on all our activities with the 70th Anniversary at our website https://www.dday.org/70th-anniversary-events.
Until next time,
Felicia
Sources
*http://www.britishpathe.com/video/d-day-commemorated-in-normandy/query/DDAY+ANNIVERSARY
*Victoria Daily Times
*Statement by the President on the 10th Anniversary of the Landing in Normandy
*Alex Kershaw, The Bedford Boys