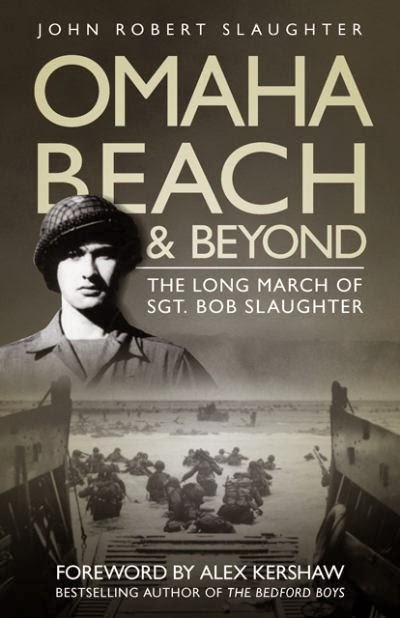 Hello everyone!  Does anyone else have one of those stacks in their house of all the books they want to read?  Well, Omaha Beach & Beyond has been on that stack since I started at the Memorial in June of 2012.  Over the last week while traveling and sitting in five different airports, I finally had a little bit of time to read Bob Slaughter’s, the founder of the National D-Day Memorial, memoir of his experiences in the war.  Once I started reading, I was hooked and did not want to stop.  Given that he was born on this day in 1925, I thought it would be fitting to bring you a short review of this book.

Slaughter takes us on his journey from growing up in Roanoke, VA to his decision to join the military, his training, and finally the battlefields of Europe. He is descriptive, allowing the reader to follow his movements through the war and showing a depth that can only come from reading the memoirs of a veteran.  Slaughter’s training in D Company of the Virginia National Guard began before his sixteenth birthday.  He had to ask permission of his parents to sign the waiver allowing him to join underage.  On February 3, 1941, his sixteenth birthday, Slaughter and the other men of the Virginia National Guard were inducted into federal service for his one year of training.  Following the attack on Pearl Harbor, Slaughter found himself in the service for the duration of the war, and at just nineteen years old, he would be leading the way on the first wave to hit Omaha Beach on June 6, 1944.

In his accounts of the Normandy landings and movement into the hedgerows, Slaughter wrote:

“Before the invasion, the 29th Division numbered about fourteen thousand, and replacements poured in as men were killed or wounded.  By the time we took Saint-Lo six weeks later, it was said that the 29th was really three divisions: one in the field, another in the hospital, and yet a third in the cemetery.  We endured those unbelievable hardships so we could participate in D-Day, which we knew would be huge, deadly, and unforgettable.  Yet we couldn’t fathom the terrible odds of surviving just one day fighting in the hedgerows of Normandy.”
Throughout the book you get a sense of what our soldiers were facing as they fought their way across battle-torn Europe.  You can feel the emotion throughout the book: fear about what he was facing, but most importantly pride in what he and his fellow servicemen accomplished.  This book is an excellent read for anyone who is interested in a more personal history and account of what our servicemen accomplished seventy years ago.
I will leave you with one last passage, Slaughter’s account of revisiting Omaha beach forty-five years after the invasion:
“Memories of that fateful day long ago overwhelmed me.  Tears welled up and began to run down my face.  I knew most of the forty brave men of my D Company who died that day on the sand and in the water…I could only wonder, shaking my head, how in the world had we ever managed to cross that long, slightly graded expanse of beach, moving upward into the teeth of a determined enemy?…It was much different on this gray and breezy afternoon forty-five years later.  I tried to recall the low tide, 200 yards lower, and the nearly five thousand ships of all kinds and descriptions out in the English Channel, forming the largest armada in history.  I also recalled other images: a burning landing ship, tank (LST) with its ramp down, an amphibious tank on fire, men and equipment floating in the water and nobody moving on the beach.  And then there were the ugly antilanding obstacles, made of timber posts with mines tied to them, that hindered our landings during the flooding tide.  The obstacles themselves were bad enough, but the early waves were forced to land at extreme low tide to avoid the potent twenty-pound teller mines tied at their apex.  This meant the battalion was forced to run across a much deeper stretch of flat sand, advancing 400-450 yard under withering fire.  Forty-Five years had done nothing to erase the vividness of these memories.”
Help us honor and remember the valor, fidelity, and sacrifice of all those brave servicemen who fought to gain ground on D-Day and began the push to Berlin to end the war.  Join us on June 6, 2014 for a special commemoration of the 70th Anniversary of the historic landings.  To find out more about events going on surrounding the commemoration, visit our website at https://www.dday.org/70th-anniversary-events.  We hope to see you here in June!
Until next time,
Felicia