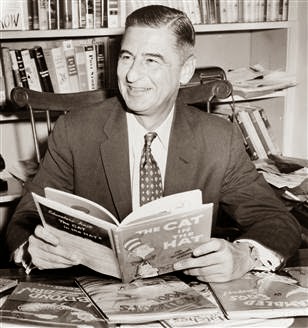 The Memorial is closed yet again because of snow.  However, that doesn’t mean that we are taking the day off!  After not getting to post last week (it was crazy busy), I will double the efforts for this week.  We are marching ever closer to the 70thAnniversary of D-Day; however, before we look toward June, I want to take a moment and mark the 110th birthday of Theodor Seuss Geisel – whom you probably know as Dr. Seuss.  Born in Springfield, Massachusetts on March 2, 1904, Geisel was a lifelong writer, poet, and cartoonist.  Over the course of his life, he published 46 children’s books which are what he is most known.  Today, however, I want to talk about some of the political cartoons he produced during World War II.
From 1941-1943, Geisel served as chief editorial cartoonist for the New York newspaper PM.  During that time he drew over 400 editorial cartoons!  Overall Geisel was supportive of President Roosevelt’s handling of the war, highly critical of isolationists (most notably Charles Lindbergh), and encouraged the public to do their part through rationing and purchasing war bonds.  There is no way I can talk about 400 cartoons – for that I would need to write a book.  However, I do want to talk about war bonds – one of many themes of his cartoons.  Ten cartoons are included in this set of war bonds and honestly these are some of my favorites from his collection.
In the cartoon on top, you see the caricature of a moose.  Those of us who grew up with his children’s books expect this kid of drawing.  Both of these cartoons is attempting to encourage people to buy more Defense Bonds and Stamps.  Produced just after Christmas, the cartoon on top is drawing a connection to the materialistic nature of the holiday with the idea that we on the homefront need to be doing everything we can to make sure the war is successful.  During the war, every little bit helped ensure Allied victory.
These next two cartoons were produced just a few months shy of each other to look at the two main Axis leaders.  Unlike Walt Disney, Geisel took an early (and often) look at the Pacific Theater.  We could spend all day discussing the racism in these cartoons–comparing his racist treatment of all Japanese-American versus his condemnation of the the treatment of the Jewish population in the United States.  You will notice that three of the four cartoons here were produced in 1942 – this is the year that Geisel started working for the Treasury Department directly creating propaganda posters for public distribution.
In 1943, Geisel joined the Army as a Captain and was commander of the Animation Department of the First Motion Picture Union of the US Army Air Forces.  During this time he wrote propaganda films including ,a 1945 film about peace in Europe after the war and the Private Snafu training films.  In 1947, his film Our Job in Japan, was adapted for commercial use and entitled Design for Death.  This film, a study of Japanese culture, won in the Academy Award for Documentary Feature.
Geisel died on September 24, 1991.  Today, his birthday marks National Read Across America Day.  If you would like to view more of Geisel’s political cartoons visit this wonderful site dedicated to these cartoons hosted by the library at UC San Diego.
Until next time,
Felicia