As we move toward the holiday season, we take time to remember all our servicemen and women around the world.  At the National D-Day Memorial, we have a special holiday time season program to honor all those who never made it home. We remember all the sacrifices our servicemen and women make everyday, and the sacrifices made by their families. Join us for our special nighttime presentation from December 12-14, 2014 entitled Flames of Memory, where4,413 luminaries around the site are lit in memory of the Allied forces who were killed in action on June 6, 1944 – men like that of Bedford Boy Sergeant Earl Parker. 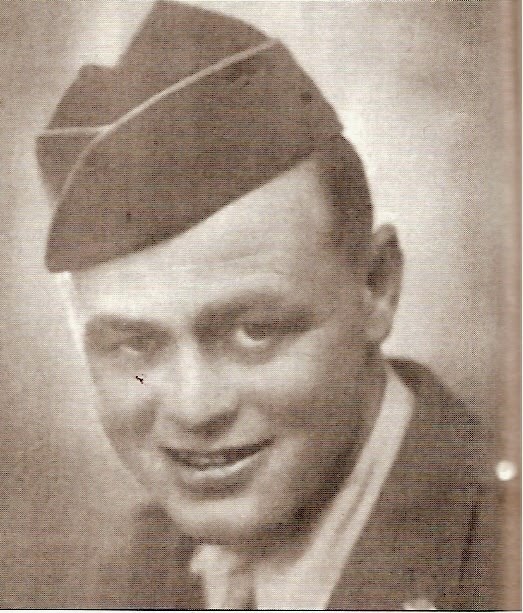 Growing up on a 300-acre beef farm, Earl Parker began working at the Piedmont Label Company, which printed labels for canned foods, after graduating from Bedford High School. He was one of three brothers – all of whom would experience combat during the war.  Younger brother Billy recalled that Earl enjoyed playing baseball and hunting.
In 1939, twenty-six-year-old Parker was a private first class in Company A.  Parker was a lighthearted young man who was madly in love with nineteen-year-old Viola Shrader, one of the prettiest and most popular girls in all of Bedford. The two were married in 1940 and shortly after Earl left their daughter, Danny, was born.
Like other wives, Viola did what she could to remain positive while her husband was away.  To his end, Parker did everything he could to get back home to visit his bride.  Anytime he would have leave, he would try to carpool with anyone headed home. Viola wrote to her husband all the time.  She tried to stress the positives, even though life without Earl was getting tougher every day.
Like many women, Viola moved back to her parents’ home with her baby. By day, she worked on her family farm and at night, she slept in her childhood room and fell asleep listening to the nightly radio news shows.
At the beginning of the invasion, the Javelin moved out in to the Channel and Roy and Ray Stevens stood at the rail with Earl Parker. Parker took the photo of his daughter Danny out of his pocket and said, “If I could see her just once, I wouldn’t mind dying.”
In mid-July, Viola received one of the first Western Union telegrams to be delivered of the Company A fatalities from June 6, 1944. It confirmed her worst fears, Earl was missing in action. She recalled, “You’re so hit that you don’t cry, you don’t do anything. I thought, ‘Well I better dust.’…I dusted the whole house.”  Afterwards, Viola took Danny in her arms, left the house, and walked towards the Peaks of Otter—the same place where she and Earl had courted.  There she wondered what she was going to do now that her love was gone, but she also told Danny “we’re going to make it.”
After the war and the men returned home, Viola went on search for answers.  Eventually, she visited Ray Nance telling him to tell her what happened because she did not believe he was dead.  Nance told her that Parker had been hit by a mortar shell and his body had been washed out to the English Channel, never to be recovered. She was comforted in knowing that Earl had died instantly without pain. The one thing that Viola had was her daughter, the greatest of parting gifts. Viola said, “She was an inspiration to go out and do something instead of sitting around crying all day.”
In 1954, Danny, eleven-years-old, unveiled a tribute to the Bedford Boys that sits at the old Bedford High School, today’s middle school. She knew the story of her local National Guard Company and knew that her daddy was a part of the largest amphibious invasion to take place in history, the invasion that allowed the Allies to start moving across Europe to end the war in May 1945.
**If you would like to learn more about Flames of Memory or make a donation to honor/remember a serviceman or woman, please click here. Help us ensure everyone is remembered this holiday season.
Until next time,
Felicia