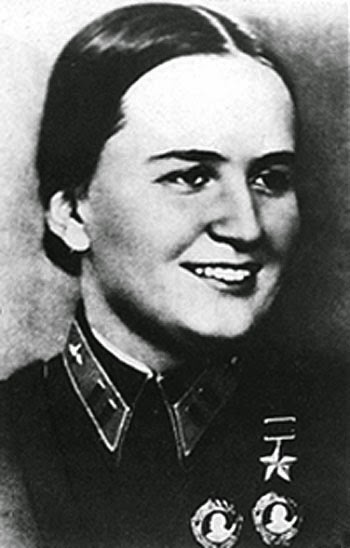 Hello everyone,
Join us at the Bedford Area Welcome Center on Thursday, March 26, 2015 at noon for the final winter lunchbox lecture of the season.  This week we will be looking at the 588th Night Bomber Regiment of the Soviet Union.  Nicknamed the Night Witches by the German soldiers, the 588th was completely women regiment – pilots, navigators, and mechanics – everyone involved in the regiment.  Marina Raskova was responsible for the formation of this regiment and two others.  A famous aviatrix and national icon, Raskova petitioned Stalin for the right for women pilots to form their own unit.  It was a battle for her, but eventually she won and was named commander of the 587th Bomber Regiment.  While on her way to the front, she was killed in a crash.  Raskova was given a state funeral and interred in the Kremlin.
The 588th Night Bomber Regiment was activated in the summer of 1942 and was honored in 1943 by building designated a “Guards” regiment, officially changing its name to the 46th Taman Guards Bomber Regiment. Initially comprised of two squadrons, a third squadron plus a training squadron was later added. Their mission was to destroy tactical targets located close to the front lines, such as fuel depots, ammunition dumps, ground troops, support vehicles, bridges, and enemy headquarters.  Members of the regiment were also used on occasion to fly supplies and ammunition to Soviet front-line troops. 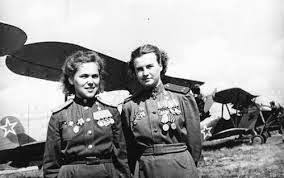 During the course of the war, women accounted for more than 12 perfect of the Soviet Union fighter aviation strength.  They were moved around to different regiments, even flying beside male pilots, who trusted the veteran women pilots as they flew as they flew as trusted wing-men on a number of missions.  One of those women was Lilya Litvyak was a pilot in the 586th Fighter Regiment.  Known as the White Rose of Stalingrad, Litvyak was the first woman pilot to shoot down an enemy aircraft, first female pilot to earn the title of fighter ace, and the holder of the record for the greatest number of fills by a female fighter pilot.

Litvyak flew her first combat flights in the summer of 1942 before being assigned to the 437th, an all male fighter unit, for the Battle of Stalingrad.  On 13 September 1942, she scored her first two kills, just three days after beginning the defense of Stalingrad.  Her second kill was a dogfight with Bf 109 G-2 piloted by Staff Sergeant Erwin Maier, an 11-victory ace, three-time recipient of the Iron Cross.  Maier parachuted from his aircraft, was captured by Soviet troops, and asked to see the Russian ace who had out flown him.  When he was taken in front of Litvyak, he thought he was being made the butt of a Soviet joke and was not until Litvyak described each movement of the dogfight that he knew he had been beaten by a woman pilot.
Litvyak was killed in action on 1 August 1943during the Battle of Kursk.  She never returned from her fourth sortie of the day and it was discovered that she was killed during a dogfight with a pair of Messerschmidt 109s.  At her death, she had achieved the rank Senior Lieutenant and was an ace in the Soviet Air Force with at least 12 solo and 4 shared kills over a total of 66 combat missions. 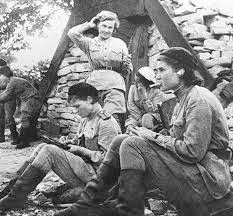 To learn more about Raskova, Litvyak and more of these incredible women, remember to join us Thursday, March 26, 2015!  We hope to see you there!
Until next time,
Felicia