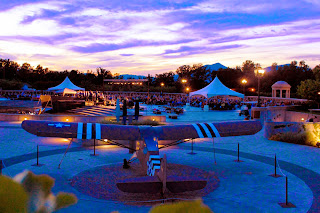 You won’t want to miss our big Memorial Day Weekend Concert featuring the Jefferson Choral Society and the Let’s Dance Band this coming Saturday, May 23, 2015! Both bands will be performing patriotic songs that will stir feelings of celebration and commemoration for those who have made the ultimate sacrifice for our freedoms. Guests will also be treated to the sounds of Big Band era music and a tribute to the English rock-n-roll sensation, The Beatles!
The Let’s Dance band will kick off the evening at 7:00 PM, followed by The Jefferson Choral Society at 8:00 PM. The Memorial will remain open until 10:00 PM. Tickets will be available at the D-Day ticket kiosk inside the Bedford Area Welcome Center or by phone at (540) 586-3329. Adults: $8:00 in advance or $10.00 at the door; students ages 6-18: $5.00 in advance or $7.00 at the door. Children under 6 are free. Bring your own chair. No coolers or pets and please bring cash, there are no ATMs on site.
~~~~~~~~~~~~~~~~~~~~~~~~~~~~~~~~~~~~~~~~~~~~~~~~~~~~~~~~~~~~~~~~~~~~
The Beatles
The Beatles took the world by storm in the 1960s, beginning in their homeland of Great Britain and then moving to the United States. Their music was so unique, so inventive, so artistically creative people had no choice but to stop and listen to the energetic boys from across the pond.
Made up of four young men; Paul McCartney, bass, Ringo Starr, drums, George Harrison, guitar lead, and John Lennon, rhythm guitar, The Beatles created a limitless variety of sounds and harmonies not traditionally seen in rock music of the time. There classic sixties, sophisticated, smart style allowed them to set new standards for marketable and artistic success in rock/pop genres.

Despite hardships, chaos, and personal tragedy, The Beatles legacy has stood the test of time. Their music continues to inspire people of all ages and their timeless quality knows no bounds; their influence is palpable. The success of Beatlemania hit the world not once, but twice. In 2009, a release of re-mastered original studio performances opened up a completely new generation to their iconic music, selling over one million copies worldwide. Parents and their children alike have music to bond them together forever.
I hope you will join to celebrate our veterans and the musical talents of the Jefferson Choral Society as their pay tribute to our heroes and The Beatles.
Take Care,
Elizabeth