Hello everyone,
Saturday is quickly approaching as we prepare to commemorate the 71st Anniversary of D-Day.  As we gather together today to pay homage to the brave soldiers, sailors, and airmen who participated in the largest amphibious invasion in history, let us not forget those who gave their lives in service to their countries, the Allied nations, and the idea of liberty.  Throughout this week we will be sharing with you stories of those men who were killed-in-action on 6 June 1944.  We hope you join us on Saturday at 11AM for a special ceremony in remembrance of the valor, fidelity, and sacrifice shown by the soldiers, sailors, and airmen of the Allied Expeditionary Force.  For more information about the events this Saturday, please visit our website at www.www.dday.org.
One of the great delights that I have working at the Memorial is spending time with D-Day veterans and getting to speak with family members of D-Day servicemen.  The following account of PFC Lawrence Roberts was sent to me just this last week from his nephew. A special thank you goes to Alan Roberts for sharing this information.
Private First Class Lawrence A. Roberts 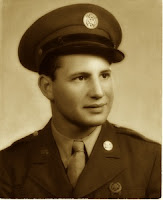 Born on 7 February 1924 in Inman, New York (Franklin County), Roberts was one of twelve children.  In the early 1940s, he decided to move to Auburn, NY where many of his older siblings had relocating after marriage.  It was here that he attended Port Byron High School and worked in the defense industry.  Auburn was home to the American Locomotive Company and in 1942 they were in a great expansion of the commercial plant facilities to accommodate wartime production needs of diesel engines and turbo chargers.
Roberts was inducted into the service February 1943 in Auburn and was placed in the 299th Combat Engineer Battalion with many other men from the Auburn/Buffalo region.  In March 1943, men began arriving at Camp White in Oregon for training in the 299thCombat Battalion.  Training included close order drill, extended order drill, practice rifle marksmanship, use and types of engineer tools, rigging, bridge construction, and basic demolition.  In April 1944 it was time for the battalion to move to England aboard the S.S. Exchequer – a cargo ship converted to troop transport ship.  Roberts, like majority of the men in the 299th, was from NY and watched that familiar skyline fade from view knowing that it would be a long time, if ever, before they would set eyes on their homeland again.
More training and preparations ensued after reaching England.  Then the day arrived.  On 1 June 1944, men gathered in the embarkation areas at the Port of Weymouth.  Explosives were loaded aboard LCM’s and the men in LCA’s transported out into the harbor where they were loaded and embarked onto the HMS Princess Maud and LST’s.   For the next few days, men spent their time receiving regulations, briefing, practicing battle stations, preparing explosives, practice debarkation, and briefing on the latest intelligence reports concerning the beaches.
At 0030 on 6 June 1944 the men were awakened, breakfast was served and by 0200 men and equipment were made ready for the operation.  Roberts would be among some of the first men to hit the Easy Red sector of Omaha Beach at 0633 with Company A of the 299th Combat Engineer Battalion.  Eight assault teams of the 299thEngineer Combat Battalion landed in three sectors with the mission of clearing eight 50-yard gaps in the underwater obstacles.  This Battalion was the only Engineer unit to land on both American beachheads on D-Day.  By 0715 support boats were landing; however, Infantry was pinned down by heavy, deadly mortar and artillery fire.  Five of the eight gaps the 299th had been assigned were blown.

In a letter received from Michael Accordino, fellow Engineer and member of his assault boat team, it is believed that Roberts was killed in action (the first causality of the invasion for his hometown) along with several other members of the assault boat team when explosives they had placed went off prematurely.   Roberts was interred in Normandy with so many other servicemen who were killed in action on D-Day and throughout the Overlord Campaign. Until the day she died, Roberts’ mother flew his service flag every summer day – reminding everyone of the sacrifices their family, their community, and this country made on that fateful June day.