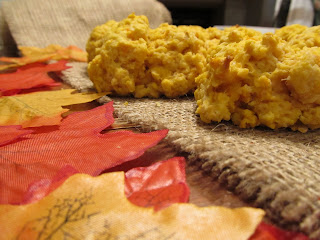 Besides the changing leaves and being able to wear boots again, I love fall because winter squash is in season at the market. Winter squash is typically harvested in September or October and consists of butternut squash, spaghetti squash, acorn squash and many other variants. During the 1940’s in an effort to reduce waste during World War II, leftover winter squash was used to make tasty biscuits.
Recipe from “Grandma’s Wartime Kitchen: World War II and the Way We Cooked” by Joanne Lamb Hayes
Ingredients:
·         2 cups of unsifted all-purpose flour
·         3 tablespoons of light brown sugar
·         3 teaspoons of baking powder
·         ¼ teaspoon of salt
·         ¼ cup of shortening
·         ½ cup of milk
·         ½ cup of pureed winter squash puree
Instructions:
·         Preheat oven to 375oF. Lightly grease a baking sheet.
·         Combine flour, brown sugar, baking powder, and salt in a medium bowl. Cut in shortening with a pastry blender or 2 knives until the mixture forms coarse crumbles
·         Combine milk and squash puree. Add to flour mixture and stir together just until all flour mixture has been moistened. Spoon out onto greased baking sheet to make 12 biscuits.
·         Bake for 15 to 20 minutes or until lightly browned.
·         Cool for 5 minutes on baking sheet. Remove to serving basket and serve warm. 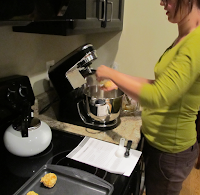 Honestly, this was a fairly simple recipe and easy to make. The most frustrating part of the recipe was

making the puree since I did not buy frozen butternut squash, but even that wasn’t difficult.  It felt even more like a true “ration-era” recipe since I pulled all of the ingredients from my pantry, except for the squash.

As they were cooling, I was prepared for these not to taste the best as most ration recipes tend to taste bland. But, they surprised me in the most pleasant way. They sort of reminded me of Red Lobster’s biscuits. I plan on making them again this fall, but probably with more salt and adding cheddar cheese.
I hope that you take some time to try out this recipe and possibly incorporate it into one of your fall dinners!
Until next time,
Maggie