Posted at 17:30h in #dday70th, Bedford, Bedford Boys, Christmas, D-Day Veterans, John Schenk, Luminaries, National D-Day Memorial, Uncategorized, Veterans Day, Virginia Tech, WWII, WWII veterans by Angela Lynch 0 Comments
0 Likes
Share
Hello Friends!
As I am sure you have noticed, fall does not necessarily mean that the National D-Day Memorial is not busy with events and school groups. However, we are starting to slow down a bit and are getting excited for one of our favorite events of the year, Flames of Memory and Christmas in Wartime Presentation.
During this event, thousands of luminaries are arranged throughout the Memorial and shine in recognition of Overlord’s fallen and in tribute to the ultimate sacrifice each one of them made to relight the lamp of freedom. This event is not only beautiful, but is such a vivid reminder of the sacrifice of the men on the beaches of Normandy. As twilight deepens and obscures the Blue Ridge, the Memorial will honor the 4,413 men killed on D-Day the nights of December 11-13, 2015 from 6PM-9PM. Admission is free, but donations are appreciated.
Luminaries are sold throughout the year and can be purchased in honor of or in memory of a loved one that has served or who is currently serving. Each luminary costs $20, or six for $100, and they can be purchased in honor or memory of anyone who has served in the U.S. Armed Forces, D-Day veteran or not. All proceeds benefit the Memorial and are tax-deductible. Also, group sales are available. If you are interested in purchasing a luminary, visit www.www.dday.org and click on “GIVING” or  call (540) 586-3329 for more information.
We would also like to extend a very special thanks to the Virginia Moose Association for supporting this worthy endeavor. 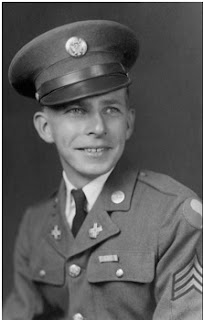 One thing we like to do each year leading up to Flames of Memory is to recognize a few of our D-Day fallen in our blog posts.  Today, I want to recognize one of our own from Bedford.
John Burwell Schenk was born in September 1916 in Bedford. He was a student in Business Administration at Virginia Tech and joined the Virginia National Guard on February 3, 1941.
One of my favorite things about John was his relationship with Ivylyn. In 1941, John was set up by a friend on a blind date with Ivylyn Jordan that lasted late into the night. They continued to date after the war began and eventually were married when he was on leave from Camp Blanding, Florida. After he deployed to England to prepare for D-Day, John and Ivylyn wrote letters to each other every day when Schenk was in England.
Just before the Normandy invasion, Ivylyn wrote a letter to John on May 21, 1944. Below is a portion of that letter:
“Although I haven’t written [recently] my heart has been filled with thoughts for and about you. Your letters are so full of hope and brightness for the future. Several have come this week written May 7, 8, 10, and 11th. They have been like sunbeams on long winter days…”
In their letters, not only did they discuss their love for one another, they talked about the daily events of their lives. After over twenty months of being apart due to the war, the war did not allow them to make it to their two year wedding anniversary. 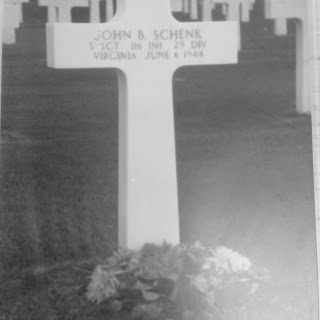 As a part of the 29th Division, 116th Regiment, Company A, Ssgt. John Schenk landed in the first wave of the assault on Omaha Beach with other young soldiers from Bedford, Virginia. Their objective was to get up to the high-water mark and off the beach. However, many did not make it. John was one of those men who died due to heavy fire as they reached the shore.
On July 17, 1944, his parents received news from the War Department that John was killed in action in France on June 6, 1944. Although the news was not what Ivylyn expected, she lived her life like John would’ve liked for her to as she carried on his memory even though she remarried. He is buried at the American Cemetery at Normandy.
Until Next Time,
Maggie