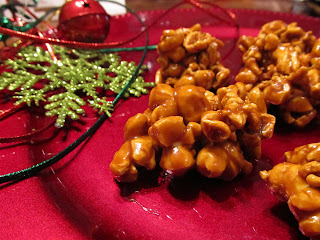 This week, we are combining two of my favorite things into one blog post: Popcorn and Christmas.
Popcorn was popular in World War II at Christmas. Not only was it used as garland on Christmas trees, but it was used to make tasty treats at the holidays. Peanut Butter Popcorn Balls provide a source of protein and satisfy the holiday sweet tooth without forsaking the war effort.
Recipe from “Grandma’s Wartime Kitchen: World War II and the Way We Cooked” by Joanne Lamb Hayes
Ingredients:
·         1 cup light molasses
·         2/3  cup of light corn syrup
·         1 tablespoon of vinegar
·         1 teaspoon of salt
·         1/2 cup of peanut butter
·         1/2 teaspoon of vanilla extract
·         3 quarts of popped corn
Instructions:
·         Combine molasses, corn syrup, vinegar, and salt in a heavy 3-quart saucepan. Bring to a boil over medium heat, stirring frequently until mixture reaches 250oF or until a little syrup dropped into cold water forms a hard ball. Remove from heat and stir in peanut butter and vanilla.
·         While syrup is cooking, spread out popcorn in a deep roasting pan. When peanut butter mixture has been combined, pour immediately over popcorn and stir until popcorn is evenly coated.
·         Lightly oil hands and shape mixture into 12 balls. Set aside to cool completely.
I will be honest, this recipe sounded much more promising than what it turned out to be. It was more difficult and messy than I anticipated in regards to mixing the molasses-peanut butter combination with the popcorn. I’ve also never really liked molasses, and the popcorn balls tasted more like molasses than peanut butter. They also did not stick together well at all, even after putting them in the refrigerator.
Perhaps, the reason why I did not do too well with this recipe is because I made it. I hope that you take time to try it out and I hope that you have better results than I did, especially if you like molasses J
Until next time,
Maggie