26 Jan Who Wins the Battle Between American and German Soldier Rations?

Posted at 19:00h in #dday, #dday70th, American rations, German rations, K Rations, MRE, National D-Day Memorial, Uncategorized, WWII, WWII Food by admin 0 Comments
1 Like
Share
Hello Again, Friends!
A few months ago when I was putting up the artifacts after a school program, I was curious about the contents of the German ration kit we used for school programs. We didn’t open it like we did the American K Ration reproduction box to limit its wear and tear due to the number of school groups we see each year. I had heard that the German rations were better than the American, and I wanted to see it for myself. So today on the blog, I am going to be comparing the two ration kits and talking a little bit about the importance of rations.
What are Rations?
Rations are packages of food designed to feed members of the military. They are made to be distributed quickly, and designed to be prepared and eaten in the field. Therefore, they are designed to have a longer shelf life.
An American Ration Kit 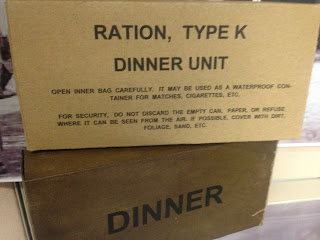 For this blog, we will be using the K Dinner Ration. They were packaged in cardboard with an interior cardboard box that was coated with wax to waterproof the box, because who wants wet food or cigarettes? Definitely not the American GI.
Here is a list of what all was inside of the box:
·         Napkin, or really just toilet paper since soldier’s on the warfront typically don’t care much about wiping their face or hands while eating
·         Pack of cigarettes
·         Stick of chewing gum
·         Matches
·         Crackers, or biscuits as they called them
·         Packet of sugar
·         Bouillon Powder—used to create soups or broths
·         P-38 can opener
·         Chocolate bar
·         Canned meat that was typically beef or pork luncheon meat 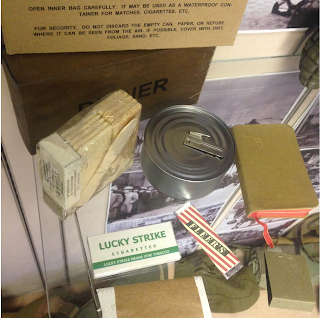 I always save the canned meat for last when showing the K Ration to school groups. Usually, the student who is holding it finds it disgusting because it jiggles, and then I give the entire group the opportunity to guess what is inside of it. I always ask if they ate the meat warm or cold during the first few days of the invasion. While many cringe at the thought of eating it cold, it is always rewarding when they connect that this was a part of the sacrifice that soldier’s made for our freedom.
A German Ration Kit
Unlike the American ration boxes, the German rations were in what appears to be a smaller cardboard container. There is no separate interior packaging for these kits.
Here a list of what all is inside this box: 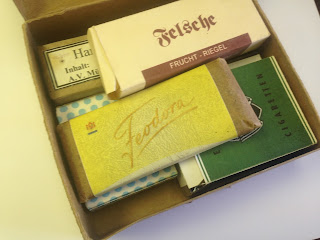 ·         Fruit and Nut Bar
·         Chocolate bar
·         Pack of cigarettes
·         Hartkek—hard and nutritious biscuits
·         Milupa BC—chocolate caramel candies
·         Kraft Keks—more biscuits
·         Coffee
Conclusions
Packaging: Without a doubt, the Americans win in regards to packaging. Not only were the boxes more durable, but the inside waxed box gave the food more protection from water.
Contents: I have to give it to the Germans. Not only did they have a greater variety of options, it was also seems more edible. Also, they had larger portions than the Americans, including the number of cigarettes – the Americans received 3 cigarettes in each box while the Germans received 6.
While the Americans may not have won in regards to the content of their ration kits, they were able to win the war! While it may not have been the most delicious, it was just what the Americans needed to end the German occupation of Europe.
Until Next Time,
Maggie