02 Feb The Role of African Americans on D-Day

Posted at 18:30h in #dday, 320th Barrage Balloons, 761st Tank Battalion, African Americans, Black History Month, Black Panthers, National D-Day Memorial, Patton, Tuskegee Airmen, Uncategorized, World War II, WWII Black History by admin 0 Comments
3 Likes
Share
Hello Friends!
Each February, the United States recognizes the accomplishments of African Americans through Black History Month.
During World War II, the practice of segregating our armed forces applied most directly to African Americans. For those of African descent, segregation in the military most often meant being pigeonholed into non-combat positions. Despite their relatively high rate of enlistment in the Armed Forces, African Americans were for the most part assigned labor-intensive duties, such as quartermaster and cook. Though the frontline was denied to most African American servicemen during World War II, there were still a handful of segregated units that distinguished themselves in battle during the Normandy campaign.
The Tuskegee Airmen 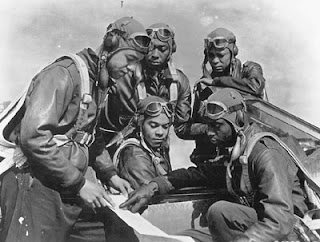 The Tuskegee Airmen is the popular name of a group of African-American military fighter and bomber pilots who fought in World War II. They were the first African American military aviators. Formally, they formed the 332nd Fighter Group and 477th Bombardment Group of the United States Army Air Forces. They flew missions in Sicily, Anzio, Normandy, the Rhineland, the Po Valley and Rome-Arno and others. The red markings that distinguished the Tuskegee Airmen included red bands on the noses of P-51s as well as a red rudder, the P-51B and D Mustangs flew with similar color schemes, with red propeller spinners, yellow wing bands and all-red tail surfaces, hence the nickname “Red Tails.” The Tuskegee Airmen accomplished a lot during the war, including destroying over 400 enemy aircraft, 950 motor vehicles, 40 boats and barges, and put a destroyer out of commission. 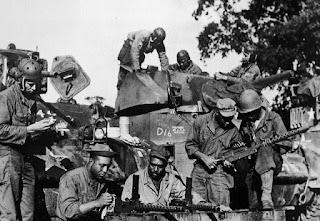 Another segregated unit that distinguished itself in battle was the famous 761st Tank Battalion, also known as the “Black Panthers”. Though this unit did not land on D-Day, they did benefit from the sacrifice made on that day as they embarked onto Omaha Beach on October 10, 1944. As a part of Patton’s 3rd Army, the 761st fought bravely until the German surrender and was amongst the first units to link up with Soviet forces in Austria. The uniqueness and importance of this first African American tank battalion is perhaps best summed up in the words Patton used to greet them on Omaha: “I have nothing but the best in my Army. I don’t care what color you are as long as you go up there and kill those Kraut sons of bitches. Everyone has their eyes on you and is expecting great things from you. Most of all, your race is looking forward to you. Don’t let them down and, damn you, don’t let me down!”
320thBarrage Balloon Battalion 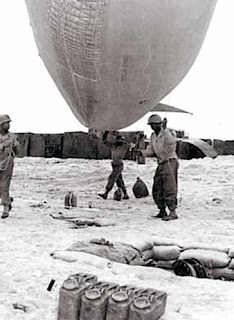 On D-Day in particular there was only one segregated unit that landed on the beaches with the assault forces. That unit was the 320th Anti-Aircraft Balloon Battalion, a unit of about 1,500 soldiers and 49 officers. Originally intended for defending the homeland, the 320th found itself reassigned to the Normandy invasion late in 1943. Their task was to defend the landing forces from low-altitude strafing aircraft by deploying gas-filled balloons attached to the ground by steel cables. These steel cables were meant to catch on the wings of passing aircraft, thus destroying them. Though originally designed to be manned by four-man teams, the soldiers of the 320th successfully performed their duties with only three-man teams. General Eisenhower praised the 320th’s service by saying that the battalion “carried out its mission with courage and determination, and proved an important element of the air defense team…your fine effort, has merited the praise of all who observed it.”
Not much has been written on the 320th Barrage Balloon Battalion, but there recently Linda Hervieux has published a book on the topic, Forgotten: The Untold Story of D-Day’s Black Heroes. We are fortunate to be able to host Mrs. Hervieux on

Monday, February 22nd at 6:30PM as a part of our annual Lunchbox Lecture series at the Bedford Welcome Center through the generosity of the Virginia Foundation of the Humanities. There will also be a book signing following her presentation.  This is no charge for admission to this lecture, but donations are appreciated to help support future educational programming. Call 800-351-DDAY for more information and to RSVP. Seating is limited.
It is incredibly important to honor and remember the valor, fidelity, and sacrifice of all who contributed to the success of D-Day and World War II no matter their gender or skin color. The brave men of the Tuskegee Airmen, 761st Tank Battalion, and 320th Barrage Balloon Battalion played integral roles in the success of the Normandy campaign and we are honored to help preserve their legacy.

Until next time,
Maggie