11 Feb The Last of the Bedford Boys: Allen Huddleston

Posted at 18:34h in #dday, #dday72, 29th Division, 75th anniversary, Allen Huddleston, Bedford Boys, Bedford VA, D-Day, Dog Green Sector, Homage, National D-Day Memorial, Omaha Beach, Queen Mary, Uncategorized, World War II, WWII by admin 0 Comments
0 Likes
Share
Hello Again, Friends!
It’s with a heavy heart that we publish this un-anticipated blog post. Yesterday, the United States lost the last of the famous Bedford Boys—the ones who valiantly stormed onto the Dog Green Sector of Omaha Beach in the first wave on D-Day. Just over 40 men from Bedford participated in the D-Day invasion and unfortunately 19 of them were dead by the end of the day on June 6, 1944. This was devastating for the small town of Bedford, which is recognized as having the most men per capita killed on D-Day. Today, we honor Allen Huddleston’s valor, fidelity, and sacrifice on D-Day and want to share his story.
During World War II before the U.S. entered the war, Allen Huddleston worked as a soda jerk at Lyle’s drugstore in downtown Bedford and married his wife, Geraldine, who was a cousin of fellow Bedford Boy, Nick Gillaspie. Knowing that military service was inevitable, he decided to join the National Guard’s 29th Division 116th Regiment Company A since he wanted to go to war with people he knew instead of taking a chance with the draft.
After training at Fort Meade for a year and a half, Company A left for England in September 1942 on the Queen Mary, which was under strict orders not to stop for anything. Because of this, she split one of her escort ships, Curacao, in half. Huddleston witnessed the event: “I was lying on my bunk when I felt a slight thud. I looked out a porthole, just in time to see half a ship sinking. We didn’t even slow down.” Those on the boat were shocked that the Queen Mary kept going instead of rescuing the hundreds of men who were drowning.
During their time in England, the Bedford Boys spent time camping out on the moors. Huddleston recounted how no one could stay dry and that one time they had to set up their pup tents in a driving rain and Captain Fellers kicked down those that were not perfectly aligned, even with people in them.While training for the invasion, Allen broke his ankle practicing unarmed combat strategies with Sergeant Robert Goode, also of Bedford. As a result, he missed the D-Day invasion on June 6, 1944.
He rejoined the Company A on August 28th in Brest, France. He did not recognize anyone, and even found out that fellow Bedford Boy, Joe Parker, had died the day before he arrived. Another Bedford Boy, Mess Sergeant Earl Newcomb, was still with Company A, but Huddleston never saw him. Just a month later during the Aachen offensive, Huddleston was re-injured—this time with a shoulder injury from the shrapnel of a shell. He was sent home shortly afterward and arrived back in Bedford in April 1945.
As one of the few Bedford Boys to return from Europe, Allen Huddleston said he had someone

looking out for him on the day of the D-Day invasion. After the war, he and Geraldine welcomed two sons and he opened a photography shop in Bedford. He is also credited with writing the inscription on the monument dedicated to the Bedford Boys in 1954 in front of the Courthouse in downtown Bedford. 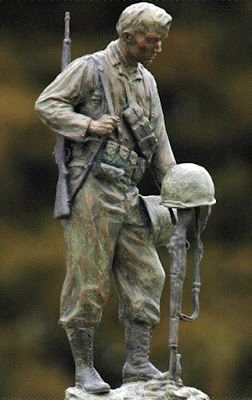 It truly is the end of an era for Bedford, and the United States. But, it is also a chilling reminder that our time is limited to honor and thank all WWII veterans while they are still with us. More than ever it is important to preserve and share the legacy of Mr. Huddleston, the Bedford Boys, and all D-Day and WWII veterans for future generations. I want to encourage you to thank the WWII veterans in your family or in your neighborhoods for the service, and to take the time to listen to their stories. What motivates people to share the legacy of our WWII veterans is not facts and statistics about WWII, but stories that make the war personal to them.
Here at the National D-Day Memorial we do this through our educational programming and by maintaining for the nation a memorial to the valor, fidelity, and sacrifice of the Allied forces that took part in the landing at Normandy, France on 6 June 1944. Visit our website at www.dday.org to find out more about visiting the Memorial, our educational initiatives and programming, and how to support the Memorial in telling the D-Day story today and ensure its retelling tomorrow.
Until Next Time,
Maggie and Ches
Sources
Kershaw, Alex. The Bedford Boys: One American Town’s Ultimate D-Day Sacrifice. Cambridge, MA: Da Capo Press, 2003.
“The Last of the Bedford Boys.” Combat 15.1 (Winter 2007).