Posted at 17:30h in #dday, #dday72, #ddayfallen, D-Day, D-Day Fallen, John Anderson, LCT, National D-Day Memorial, Navy, Uncategorized, Willmar by Angela Lynch 0 Comments
0 Likes
Share
D-Day was almost 72 years ago, but the memories are still vibrant, the pain of the losses hasn’t faded, and many mysteries remain unsolved. We’re pleased to report, however, that this month one of the heroes of D-Day will come home and receive the long-overdue recognition which circumstances until now have denied him. It’s a compelling story. 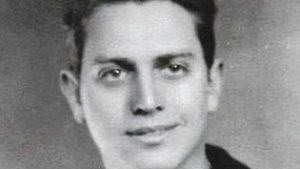 John Emanuel Anderson of Willmar, Minnesota, was a Motor Machinist Mate 1st Class in the US Navy on June 6, 1944. He served as part of the crew of LCT-30 (Landing Craft Tank), delivering part of an anti-aircraft battalion to Omaha Beach in the thick of the fight. That noble vessel entered the field of D-Day legend with a “damn-the-torpedoes” charge against the beach obstacles, many of which had been submerged by rising tide by the time LCT-30 arrived.

Although the ship completed its mission safely, in withdrawing from the beach it was hit by a German shell and the engine room where Anderson was stationed flooded. He was the only fatality reported in official records for that craft; however for reasons never fully explained his body was listed as not recovered.
(The rest of the crew abandoned ship and hit the beach, where several were wounded by enemy fire or shrapnel. They were eventually able to evacuate, but their beached vessel, now without a working engine, remained for days afterwards and is seen in the background of many post-D-day photos).
Some assumed Anderson had been buried at sea by his shipmates later. Others that his body washed out into the channel, never to be seen again. What didn’t occur to anyone was that his remains and his identity might have simply become separated.
Back in Willmar, Anderson’s parents and family mourned. They no doubt relived their grief, mixed with a twinge of pride, when John’s name went onto the “Tablets of the Missing” at the Normandy-American cemetery. And they went to their own graves never knowing where the mortal remains of their son were.
Now fast forward to 2009. A researcher (who has made it his mission to help give a name to the unidentified remains of American military personnel) contacted John Anderson’s family. An elderly sister survived; plus many of the next generation who felt immense pride in their kinsman’s service. The researcher claimed to have evidence that John’s body had not, in fact, been lost at sea, but had been recovered from LCT-30 and had been listed as unidentified burial X-91, lying in an anonymous grave in Normandy.
The only way to be sure, however, was to do DNA testing on surviving relatives and on the remains in X-91. The family was more than willing, but the military took much more convincing. What they hoped would be a matter of months turned into more than six years.
However, patience and persistence paid off, and last fall the remains were disinterred and brought to the US for DNA testing. The results were conclusive. The body in X-91 could only be that of John E. Anderson. Later this month, he will be laid to rest next to his parents in Wilmar in a special ceremony.
It’s been six dozen years since 2,499 American men laid down their lives in a valiant effort to complete their mission in Normandy. One of those men now has come home. A 72-year-old mystery has been solved; a grieving family now has closure to a painful memory of loss. We as a nation can take the opportunity to honor John Anderson and the other men who died alongside him. They completed their mission to, in Ike’s words on that fateful day, “bring about the destruction of the German war machine, the elimination of Nazi tyranny over oppressed peoples of Europe, and security for ourselves in a free world.”
Welcome home, Petty Officer Anderson, and may you rest in peace beneath the brilliant blue skies of Minnesota. The National D-Day Memorial will be sure your legacy of valor, fidelity and sacrifice never fades.
-John