09 Jun “Miracle of Deliverance”: The Evacuation of Dunkirk 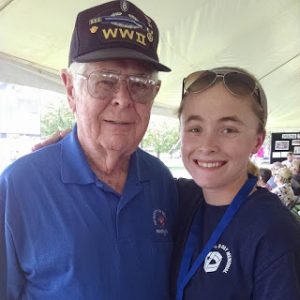 Abby with Hayden Furrow, a WWII and D-Day Veteran

My name is Abby and I am an Education intern here at the National D-Day Memorial. As an intern, I assist with field trips and give tours of the Memorial. As the first full week of June comes to a close, I wanted to focus on one of the events that set the stage early on in the war: the evacuation of Dunkirk.

After the Germans invaded the Low Countries (comprised primarily of Belgium and the Netherlands), the British Expeditionary Force (BEF), along with French and Belgian troops, sent aid in order to prevent their fall. Despite sending aid, the Allied forces were unable to prevent the German panzer divisions from moving into the Ardennes and towards the English Channel. On May 20, the Germans cut off the BEF after capturing the coastline. The German objective then shifted to taking various Channel ports to prevent the Allied forces from successfully evacuating to the British mainland. On May 24, Hitler instructed General Gerd von Rundstedt, the commander of the German forces in the Low Countries, to go forward with the attack against the cornered Allied forces. Rundstedt planned to utilize his infantry and armored divisions, along with Luftwaffe support, to finish the BEF off. 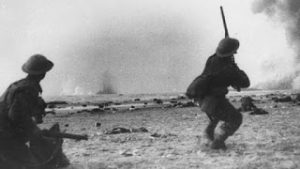 Fearing for the worst, General Lord John Gort, commander of the BEF, called for the evacuation of his forces from Northern France.  Gort withdrew the BEF and established their position around the port of Dunkirk. Back in England, Prime Minister Winston Churchill and Vice Admiral Bertram Ramsay met to plan the evacuation, codenamed “Operation Dynamo”. The evacuation called for a fleet of naval destroyers and merchant ships, supplemented by 700 “little ships” (civilian pleasure craft, fishing vessels, etc.). The operation hoped to take two days to rescue 45,000 men, as German interference was expected to end the evacuation after a 48 hour window. 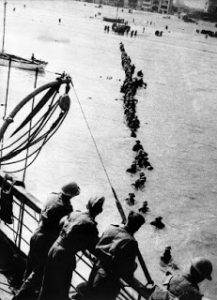 Operation Dynamo commenced on May 27. On the first day, 7,669 men were rescued, with many soldiers having to wade out to the boats in order to board. On May 28, 17,804 were rescued. Despite the original plan for the operation to last only two days, the evacuations continued past May 28, as the German perimeter around Dunkirk began to shrink. The Royal Air Force continued to push back the Luftwaffe’s attacks, allowing the evacuations to continue well into June. In early June, with increased attacks by the Luftwaffe, daylight operations were ended and evacuation ships only ran at night. On June 4, with German forces only three miles from the harbor, the last Allied ship (HMS Shikari), departed the port at 3:40 AM. Left alone, the remaining two French divisions were forced to surrender to the Germans.

With the general success of Operation Dynamo, a total of 332,226 men (including men from the BEF, French, Dutch, Belgian, and Polish forces) were rescued. In his We shall fight on the beaches speech of June 4, Winston Churchill dubbed the Dunkirk evacuation as a “miracle of deliverance”. Despite significant loses, the Dunkirk evacuation secured the core of the British Army and made it available for the immediate defense of Britain in upcoming campaigns, such as the Battle of Britain.
Sources:
http://www.history.com/this-day-in-history/dunkirk-evacuation-ends
Harman, Nicholas. Dunkirk, the Patriotic Myth. 1980. Print.