Posted at 20:15h in #dday, #dday72, Atlantic Wall, D-Day, Hedgehogs, National D-Day Memorial, Nazi Germany, Pas de Calais, Rommel, Uncategorized, World War II, WWII by admin 0 Comments
0 Likes
Share
My name is Tyler; I am a history major at the University of Virginia and am interning with the National D-Day Memorial over the summer. My primary internship responsibilities include the expansion and maintenance of our archives, giving tours, and assisting with our many education programs. Having been exposed to so much D-Day history in the past few months, I developed an interest in the obstacles these soldiers faced and decided to complete more research on the Atlantic Wall. 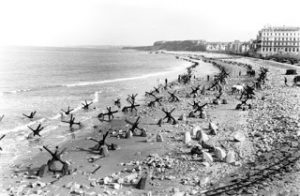 On March 23, 1942 Adolf Hitler issued Fuhrer Directive No. 40 calling for the creation of the Atlantic Wall.  A nearly 2000-mile long line of coastal defenses, the Atlantic Wall stretched from the northern reaches of Norway, along the coast of continental Europe, and down to the Franco-Spanish border.  Its purpose, to defend against an Allied invasion of Europe no matter where it may come.

The monumental task of designing and building this defensive network was given to Organization Todt, the engineering group which had been responsible for both the Autobahn and the Siegfried Line which protected Germany’s western border.  Over half a million French workers were drafted through the Vichy regime’s compulsory labor program to build the defenses.  Many were paid for their labor, although not much, but slave labor was used as well.  Even with these savings in labor costs the project was enormously expensive, requiring both money and resources.  In France alone the cost was over 3.5 billion Deutschmarks, and the wall defenses as a whole required 600 million cubic feet of concrete and 1.3 million tons of steel. 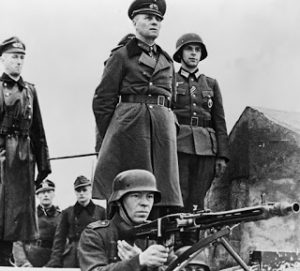 Initially these defenses were concentrated around naval and U-boat bases. But starting in late 1943, the fortifications were expanded to cover virtually the entire coast.  In early 1944, Field Marshall Erwin Rommel was given the task of improving the defenses against an increasingly likely Allied invasion.  Because of his experience fighting the Allies in North Africa, Rommel believed that Allied air power posed the greatest threat.  Owing to this, he ordered the building of reinforced concrete bunkers and pillboxes capable of surviving an aerial bombardment.  Further inland, in the open fields of farmland, large sharpened logs were driven into the ground.  Known as “Rommel’s asparagus”, these were meant to destroy Allied gliders should they try to land.

Rommel also believed, quite rightly, that if the Allies were able to secure a beachhead then the war would be lost for Germany.  As such, the beaches were where he focused most of his attention.  Numerous beach obstacles were put in place to guard against Allied landing craft. Steel “hedgehogs” and tetrahedrons were placed in the water to tear out the hull of the invasion craft, and log ramps were erected to capsize them. Mines were used extensively, both in the water and behind the beaches as well; in Northern France alone, over 6 million of these mines were laid.  Rommel never believed that these obstacles would stop an invasion, but he hoped they would slow it down enough to allow reinforcements arrive and repulse the Allied forces.
Clearly, the task of invading France was no easy one, and the Allies knew they would need luck on their side in order to pull it off.  The reserve panzer divisions which could have repulsed the invasion could only be released upon the direct order of the Fuhrer himself. And as luck would have it, Adolf Hitler had taken a sleeping pill the night before the invasion and his staff refused to wake him.  Because of this one blunder, the entire defense network was rendered virtually useless and the Allied invasion succeeded.
-Tyler