Posted at 16:00h in #dday, #dday72, #ddayfallen, 116th Infantry Regiment, 29th Division, Company D, National D-Day Memorial, Roanoke Boys, Uncategorized, Virginia History, Walt Schilling by Angela Lynch 0 Comments
0 Likes
Share
My name is Will Harris and I am an intern at the National D-Day Memorial. My main focus as an intern this summer is my research project which focuses on Roanoke, Virginia’s National Guard company. D Company of the 116th Regiment, 29th Division was in the same battalion as the famous “Bedford Boys” of Company A. Company D landed just behind A Company on Omaha Beach and suffered a similarly large number of dead and wounded. One of the dead was their Company Commander Captain Walter O. Schilling.

Walt Schilling is representative of the concept of a citizen soldier. As a member of the National Guard, he was willing to put his civilian career on hold to defend his nation. Unlike most Army officers in World War Two, Capt. Schilling did not attend the United States Military Academy or any other military college, but instead rose through the ranks. Well respected by his men for his leadership during the 29th’s preparation for the Normandy assault, Capt. Schilling made it his mission to lead from the front.

Capt. Schilling’s leadership style and service as a citizen soldier is similar to that of the character of Capt. Miller in Steven Spielberg’s film Saving Private Ryan. Captain Miller left his job as a high school English teacher to join the Army and eventually serve as the Company Commander of C Company, 2nd Ranger Battalion. Miller, like Schilling, understood the importance of leading his men through his own example, even if the orders they received seemed suspect or unusual. 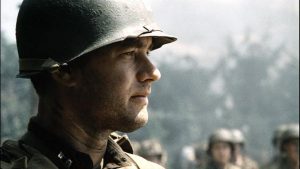 While the character of Captain Miller is fictional, he and Walt Schilling represent the hundreds of Captains and Lieutenants who went ashore on D-Day with the mission of leading their men onto the beaches. This proved to be an enormous task with communications almost non-existent and German defenses preventing any type of coherent advance. The surviving officers rallied what men they could, and lead them in the destruction of German emplacements and the eventual exit from Omaha Beach.

The 4,413 names on the D-Day Memorial’s necrology wall are of officers and enlisted men who gave their lives so that France could be liberated and the Nazi regime overthrown. Each name has a story of sacrifice attached to it that cannot be forgotten.
-Will
Sources:
Slaughter, John R. Omaha Beach And Beyond: The Long March of Sergeant Bob Slaughter.
St. Paul, MN: Zenith Press, 2007.
http://www.imdb.com/character/ch0334796/quotes