Posted at 17:13h in #dday, #dday72, Airgraph, letters from home, National D-Day Memorial, Uncategorized, v-mail, victory mail, vmail, WWII letters by Angela Lynch 1 Comment
2 Likes
Share
Millions of men served in the US military during World War II.  Many of them needed to be trained and equipped for combat, but equally important were the many support roles which allowed for smooth operations.  Even the simplest tasks became much more complex due to the sheer scale in which they needed to be carried out, and so an army of men was needed to support the army of men.  But regardless of their role the men had one unifying factor; they were away from home.  And so these millions of men sent and received millions of letters, and the task of sending and delivering all this mail proved quite the challenge. 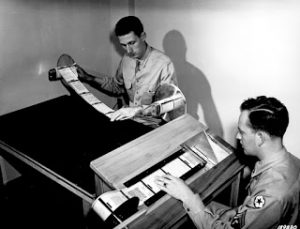 The major problem came in transporting the mail across the Atlantic Ocean.  Mail sent via cargo ships was slow to arrive, taking up to a month.  But the alternative of sending mail via cargo planes, taking less than two weeks, was expensive.  Cargo space on these planes was at a premium, and letters were bulky both in weight and in the space that they took up.  In searching for a way to address this problem, the military postal service turned their eyes to the British “Airgraph”.

The British had encountered the same problem as the Americans when it came to sending mail to and from their troops stationed in the Middle East.  After the Italians closed off the Mediterranean Sea and Suez Canal to the Allies, mail had to be sent all the way around the Cape of Good Hope.  This meant letters could sometimes take three to six months to arrive at their destination.  Sending mail by air was far preferable, but the bulk needed to be reduced.  Their solution they termed the “Airgraph”.  Based on a process invented in the 1930s by Eastman Kodak, the “Airgraph” became the preferred method of sending mail.  Letters would be written on premade forms, these forms would be censored and scanned onto microfilm, the microfilm would be transported by plane, and on arrival the letters would be printed onto photo paper and delivered. 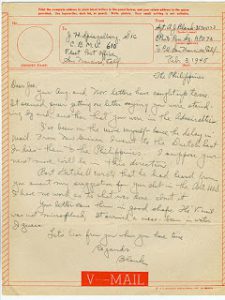 The US military postal service adopted this process renaming it “Victory Mail”, or “V-Mail” for short, and it proved extremely effective.  The savings of this system were enormous; 2500 pounds of paper letters in 37 mail sacks could be condensed into only 45 pounds of film in one mail sack.  In turn, this freed up room for more materiel to supply the war effort.  The US further reduced waste by only printing the letters at 60% scale.  The use of V-mail also inadvertently deterred espionage; as only photocopies of letters were being sent, invisible ink and microdots were rendered useless.  In addition, letters could not be “lost” in transit; every letter carried a serial number and new copies could be printed if necessary.  After being introduced in mid 1942, V-Mail became the primary method of communication for US soldiers stationed abroad until the end of the war in 1945 with over a billion letters going through the system.  As such, it was a staple not just of a soldier’s life, but of Americans back home as well.