04 Aug Bob Slaughter’s Order of the Day: An Endangered Artifact

Posted at 13:25h in #dday, Bob Slaughter, D-Day, Eisenhower, National D-Day Memorial, Normandy, Omaha Beach, Order of the Day, Top 10 Endangered Artifact, Uncategorized, VAM by Angela Lynch 0 Comments
0 Likes
Share
On June 5 or 6, 1944, hours before embarking on the greatest invasion of WWII, American soldiers, sailors and airmen received a special message from their commander, Gen. Dwight Eisenhower. The printed “pep talk” informed the men that they were “about to embark upon the great crusade,” defined the coming fight as one of freedom versus tyranny, and encouraged the men that “we will accept nothing less than full victory.” Known as the Order of the Day, the D-Day message was one of the most important military documents in US history. 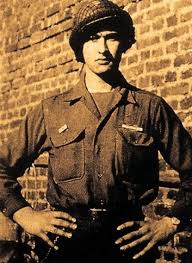 Few of the men that day, facing the biggest fight of their lives, thought to save their copies of the Order of the Day. But one man who did was the founder of the National D-Day Memorial:

John Robert “Bob” Slaughter of Roanoke.
Bob was a survivor of D-Day, a sergeant in the 116thRegiment of the 29th Division at Omaha Beach on June 6, 1944. Like his fellow soldiers, he received a copy of the Order of the Day as he awaited the order to begin the invasion of Normandy. But unlike most of the men, he realized the historic nature of the document and of the day. He circulated through his company and had his buddies sign their names to his copy; then folded it into a plastic bag and tucked it into his wallet. He carried his Order of the Day through the rest of his time in service, and afterwards described it as his “most treasured souvenir of the war.”
It was, for many years, his own personal memorial to the men of D-Day. Of the 75 soldiers who signed Bob’s Order that night, eleven would be dead within hours.
Bob went on to become perhaps the best known D-Day veteran in the nation, but he never forgot the men who never made it off those beaches. Often he would speak to school groups, club meetings, or civic organizations, and show his Order of the Day as he told his poignant story. 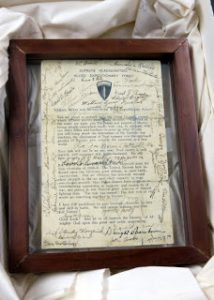 Slaughter’s copy of the Order of the Day

Bob died in 2012. Earlier this year, his family donated his framed copy of the Order of the Day, along with the rest of his papers, to the Memorial he did so much to build.

The tattered scrap of paper is now one of the most significant items in our collection, a tangible reminder of the costs of that crucial day in history. It was actually there on Omaha Beach, and against all odds survived. Very few original copies of Ike’s Order survive, and even fewer with the signatures of D-Day participants. That’s why the staff and volunteers who have had the chance to see and hold Bob’s Order (it’s too fragile to be on public display, so only limited access is permitted) find it a chilling experience. All have been awed; some have been moved to tears, as they realize that for so many heroes it was the last time they ever wrote their name.
The Order is, sadly, in very fragile shape. Printed on inferior wartime paper, it literally endured months of battlefield conditions. Creased, torn, faded and unfortunately repaired with tape, this highly significant artifact stands greatly in need of conservation. Yet the rarity and historical significance of Bob’s Order of the Day make it imperative to preserve this endangered artifact. It’s a testament to one of the most important battles of the 20th Century and to the men who fought it.
That is why the National D-Day Memorial has nominated Bob’s Order of the Day for the Top Ten Endangered Artifact program of the Virginia Association of Museums. And to raise awareness of the need to preserve such treasures, our supporters are invited to vote online through the month of August in the popular poll! 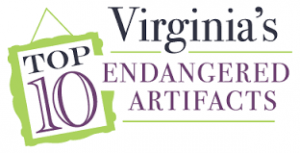 Anyone and everyone can cast their votes at www.vatop10artifacts.org. Supporters are encouraged to vote as often as they like—there is no limit of one vote per person or one vote per day. We’ve timed it—you can vote about five times in one minute!
Those wishing to make a lasting impact can also donate to the conservation of any of the twenty nominated artifacts, including the Order.
We have participated in the Top 10 Endangered Artifacts Poll for many years, but this time we are hoping folks will support our nomination in record numbers. It’s an important part of our history and a great way to honor the men who won the war for us. So get started voting—vote early, vote often!
-John