Posted at 17:09h in #75wwii, #dday, #dday72, Combat Engineers, D-Day, Donald C. Carr, Hill's Hellions, National D-Day Memorial, Navy, Navy SEALs, NCDU, Operation Overlord, Seabees, Uncategorized by Angela Lynch 0 Comments
3 Likes
Share
My name is Victoria Carr. I am a senior at Mary Baldwin College as a history major and I’m spending my summer as an intern at the National D-Day Memorial. As an intern with the Education Department, I have worked closely with the school groups, giving tours, and assisting with educational programs and events.
During World War I, a group of elite men was added to the U.S Navy to help with destroying enemy defensive obstacles. In World War II, these men were called frogmen and were a part of the Naval Combat Demolition Unit. Today, this group is known as the Navy SEALs. 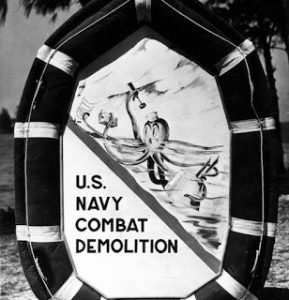 Once the US entered WWII, the Navy saw that in order to defeat the Axis powers they would need to perform a large number of amphibious attacks. They decided that men would have to go in to reconnoiter the landing beaches then locate and destroy obstacles and defenses. The Army and Navy established the Amphibious Scout and Raider School at Fort Pierce, Florida in 1943 to train men in the specialty of amphibious raids and tactics. Most of these men used their skills though North Africa, the Pacific, and the Normandy landings.
As time went on, there was a need for men to destroy obstacles. In 1943, the Navy created a large dedicated force for this task called the Naval Combat Demolition Unit, or NCDU, also located at Fort Pierce, Florida. The NCDU force meant recruitment beyond just the pool of experienced combat swimmers to the Seabees (the Navy’s construction battalions), the U.S Marines, and U.S Army combat engineers.  Most of these men were used to disarm explosives, but now they were going to learn to use them offensively. One innovation was to use 2.5 pound packs of tetryl placed in a rubber tube so that they could twisted around obstacles for demolition.
By June 1944, 34 NCDU teams were deployed in England as a part of Operation Overlord. The Germans had placed defenses on the French lines to make it hard for the Allied forces to attack without heavy lost. As the NCDU teams arrived in England, the scouts and raiders were out getting information on the obstacles placed along the French coast. For training, they built a replica of the Belgian Gates on the south coast of England for the teams to practice on. They learned that they could blow the gate to pieces creating more of an obstacle, but they would need to find the key corner joints so that it fell down flat. The Allied attack plans had the NCDU teams landing in the second wave of the D-Day invasion on 6 June 1944 and working at low tide to clear the obstacles so that troops could get though. 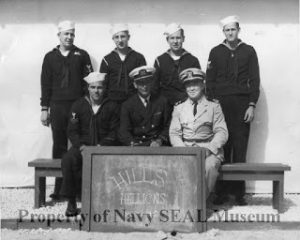 My Great Grandfather, Donald C. Carr, was part of the NCDU team during World War II and D-Day.  His NCDU was called the “Hills Hellions” or NCDU 140. He wrote a letter to his high school when he returned from Normandy. He wrote:

“I returned recently from the invasion of Normandy. The demolition crews to which I am attached were the first to land on the shores of France. Our mission was to destroy the beach obstacles so that the incoming troops and supplies could be landed with minimum of loss. Landing slightly before H-hour, we encountered heavy enemy resistance. After completing our mission we remained on the beach for 28 days then returned to the French debarkation point for transportation to England and the United States. I am sorry to say that we only returned with 53% of our men.  There are many new cemeteries on the shores of France that are filled with men who gladly gave their lives for the cause. As men have said before, you give us the equipment, we shall do the rest.”

It has been an honor to spend my summer interning at the National D-Day Memorial and having the opportunity to honor and preserve the men who stormed the beaches on June 6, 1944, like my grandfather.
-Victoria