Posted at 21:04h in Uncategorized by admin 0 Comments
0 Likes
Share
Hello, Friends!
Today, I am excited to introduce a new contributor to Sentimental Journey. Lindsay Poling, our newest Visitor Services Assistant, came on staff in December. I have known Lindsay for a few years now from our time studying history together at both the undergraduate and graduate level. Check out her first post below and feel free to comment with any suggestions on topics you would like to see in the future!
-Maggie
____________________________________________________________
In our fast-paced, ever changing world of information, our society is influenced by images produced for the screen. During wartime, media coverage increases even more stimulating a growing amount of response from the public. With a massive conflict, an Allied fight against Nazi domination and the rise of Fascism, the movies produced during the Second World War were affected by key events throughout the war. The Best Picture at the Oscars of 1944, one of the greatest movies even today, called Casablanca reflected and corresponded with the events of the war.
Movie attendance in the early 1940s increased drastically, with an estimated 80 million people buying movie tickets (per month).  With an increase of production in Hollywood and the Office of War Information, the film industry entered the Golden Age of the 1940s. Also, films produced by the government, with correspondence between the Bureau of Motion Pictures and the Office of Censorship, included short films and feature-length documentaries for the public to witness on a weekly basis. One classic wartime drama though, Casablanca, swept the hearts of the audience of 1942 and continues to rank in the top 50 movies made of all time. 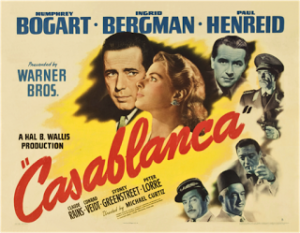 Casablanca started with a semi-completed script based on a play called “Everybody Comes to Rick’s.” Warner Brothers purchased the play in 1941, just two weeks after the attack on Pearl Harbor, for an approximate amount of $20,000. The writing of the story started in 1938 under the direction of Julius and Philip Epstein. The script continued to change and be rewritten throughout production. Ingrid Bergman, who played Ilsa, even said it was difficult to really understand her character with an unfinished script. The entire film was completed in the studio in Burbank, CA, which included the main and gambling rooms, and Rick’s (played by Humphrey Bogart) upstairs room.
But even with continuous drafts of the script, the movie produced some of the most famous lines in film history and sent powerful yet subtle messages throughout. In the film, symbolism towards the war is apparent. For example, the use of Nazi imagery and the smashing of objects related to Vichy France. The crushing of Nazi occupation and domination becomes apparent from scene to scene. Casablanca finished filming on August 3, 1942. The original release date was for June 1943. Due to the invasion of North Africa and the meetings in Casablanca with FDR, Winston Churchill, and Joseph Stalin, the initial release date changed to early November 1942 in New York City. After the conferences in Casablanca, the film was released to the public on January 23, 1942.
The film though remains in the hearts and minds of people, even today. Stimulating positive messages of love and romance and conveying a positive message for the Allied Powers, Casablanca remains one of the greatest movies of all time. Two of my favorite lines from the film (and very famous lines as well), both from Rick, were “We’ll always have Paris” and the last line of the film, “Louis, I think this is the beginning of a beautiful friendship.” 🙂
Youtube Clip: We’ll Always have Paris https://www.youtube.com/watch?v=pa-dGYjSq5k 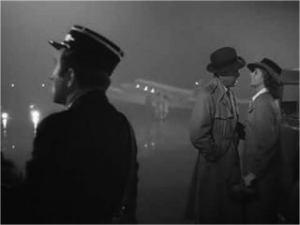