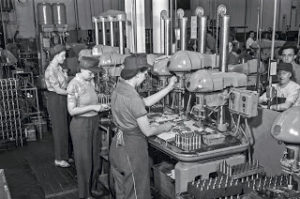 When it comes to studying the impact American women had in World War many historians look solely at the numbers. Historians look at the number of women who joined the work force, the number of planes, ships, bullets, parachutes, bandages, and any other necessity these women produced that made Allied victory possible.  Yet, these women who took up new jobs in fields they never imagined, had an impact on history that goes beyond Allied production and victory. These women, who stayed behind to support the war effort by joining the work force, also witnessed the transformation of America, specifically the transformation of small towns that became centers for war production. Such a case can be made for the town of Mobile, Alabama.

Like so many American towns, Mobile went from a small, sleepy American city to a booming war production hub seemingly overnight. Before World War II began the work force in Mobile was around 17,000 men and few women. By 1943 Brookley Air Field would employ that many civilians by the end of the War and local ship building industries would employ over 30,000 workers by 1944. Before World War II women’s occupations were limited to administrative or teaching jobs where the average salary was around $800 a year. With the onset of war came a demand for ships, planes, artillery, and endless demands for support supplies. These goods required the skilled labor of welders and mechanics. At Huntersville or Redstone Arsenals women found jobs on assembly lines that paid around $1,400 annually. Shipyards in Mobile also hired laborers, paying $3,600 annually. These jobs provided unimaginable salaries and the chance for many to move to a new city and start a new life. 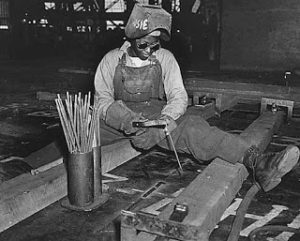 One such woman was Emma Bell Petcher. After graduating high school Petcher wanted a chance to put her love of mechanics to the test. Petcher breezed through the mechanics tests and secured a job working on airplanes. Petcher is just one example of women moving to take advantage of defense jobs in America. These women saw not only the value of their work and impact, but the American economy transform from the depths of the Great Depression to the vibrant booming economy of World War II. The economic boom would continue in the 1950’s with the War’s ed. It was due to the help of the six million women who entered the workforce that this economic boom was possible.

With workers came families. This caused the population of Mobile to more then double during the War from 110,805 in 1940 to 201,369 in 1944. With the great influx of workers came a housing shortage unseen in Mobile’s history. People were living in tents in vacant lots. Boarding houses would have four men per room or rent beds to multiple men and women with differing shifts. Oftentimes both men and women in the same family would take up a defense job, leaving childcare a much-needed commodity in Mobile. Thus, women ushered in and witnessed the evolution of day care in America. Day care centers were viewed as patriotic, promoting a safe place for loving mothers to leave their children as they went off and produced items needed to win the War. Women who manned and operated day care centers were viewed as protectors of liberty and praised for providing a service that allowed women to help win the War. Day care was not a practice forgotten after the War. Women would continue to use and work at day care centers after the War and into the later part of the twentieth century showing how the War gave women the tools needed to pursue both career and family. 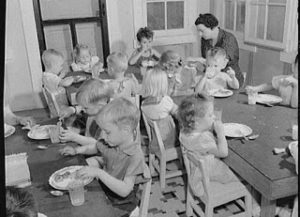 The women of Mobile during World War II also witnessed many domestic events and policies that would help shape the remainder of the 20thCentury. Mobile’s location in the Deep South made Mobile subject to Jim Crow laws. These racial regulations kept many black American citizens from taking advantage of defense jobs in the early days of war production. However, on June 25, 1941 President Roosevelt issued Executive Order 8802, banning racial discrimination in the defense industry. This was the first step toward equal opportunity employment in America, and women of all races, in Mobile witnessed the unrest and success this order brought. After the order was issued many small fights broke out in shipyards and factories in Mobile. Governor Chauncey Sparks called out 150 state guards to keep the peace, this created a precedent of having to use police and state troops to keep the peace as integration began and established itself in the defense industry. Segregated workspaces brought a peace and successful routine to the workforce in Mobile. However, Americans such as Thurgood Marshall and A. Philip Randolph were pushing to make the Fair Employment Practice Committee a permanent fixture in the Federal Government. It was the women of America, who stayed behind to serve and work who witnessed these milestone moments that would reshape America in the 1950s and 1960s.

The women of World War II Mobile gave their all to help American men win victory across the globe. The hundreds of thousands of hours spent in factories and shipyards gave the Allies and edge the Axis powers simply could not match. Yet, the women of Mobile also witnessed several key events and practices put into place during World War II that would shape the remainder of the twentieth century. Advancements in training, work assignments, childcare, and civil rights gave women new platforms to stand on after the War ended. These issues would also go on to be displayed on the national stage in the post-modern era. While it is important to remember and note the millions of supplies American women built and assembled to help the Allies win the war, it is equally important to note the transformation they witnessed and played a role in during World War II.