African-Americans were not the only ones to experience racism and discrimination by the armed forces during World War II. After the Japanese attack on Pearl Harbor on December 7, 1941, first generation Japanese Americans, Issei, and second generation, Nisei, soon faced harsh discrimination and assaults on their character and loyalty to America. Out of wartime fear, two months after Pearl Harbor, President Roosevelt signed Executive Order 9066, which authorized the internment of some 110,000 Japanese-American citizens. However, perhaps President Roosevelt and ordinary Americans should not have acted so rashly to detain over 100,000 Japanese Americans, because the war in Europe would soon demand any able bodied men to join the fight.

As American-born citizens with Japanese descent, many Nisei were eager to serve their country, but due to further discrimination, Nisei were not permitted to join the United States military. About a year after internment began, President Roosevelt reversed this policy and authorized the enlistment of Japanese Americans. However, though they were now allowed to serve in the military, Japanese Americans were restricted to a segregated infantry outfit. This unit became known as the 442nd Infantry Regimental Combat Team. Upon requests for volunteers, 10,000 Japanese Americans reported to recruiting offices in 1943. 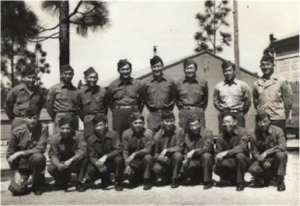 In 1944, as the Allied fight in North Africa and Italy met increased opposition from German forces, the 442nd found themselves under the command of General Mark Clark, commander of the Fifth Army in Italy. The 442nd joined the 100th Infantry Battalion, which was a majority Japanese American unit from Hawaii, created in 1942 before the ban on Japanese American involvement in the military. This unit was battle hardened, having seen action in North Africa and Italy for some time. By June 1944 and the fall of Rome, the 100th experienced many casualties and were in need of reinforcements in order to continue the fight into central Europe.

The 442nd soon proved not only their loyalty to America, but also their indispensability in Clark’s army. They were instrumental in pushing the German lines back and their heroism and bravery were admired and revered by many. General George Marshall said of the 442nd: “They were superb! They showed rare courage and tremendous fighting spirit. Everybody wanted them.” The 442nd further demonstrated their “extraordinary bravery and valor” for their service and sacrifice in France in the fall of 1944. These Nisei soldiers who were “once considered a problem by the army, [were now] seen as a problem solver,” and were called upon for a special rescue mission of the 141st Regiment who were surrounded by German forces in France. In an effort to rescue these 275 men of the 141st, the 442nd experienced immense casualties. In addition to North Africa and Italy, Japanese Americans assisted in the Pacific Theater by serving as interpreters and translators against the Japanese as part of the Military Intelligence Service. 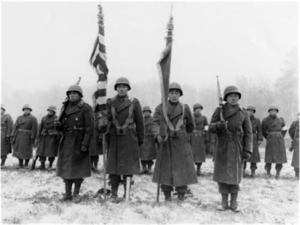 The Japanese American soldiers, such as the 100th and the 442nd are often overlooked in the history of World War II. Despite the discrimination they met at home and on the battlefield, the Nisei soldiers proved to America their worth and loyalty. The role of minorities during World War II cannot be overstated; the efforts of Japanese Americans, African Americans, women, and Native Americans were vital to allied victory. While many recognized the effort and sacrifice of Japanese Americans in both theaters of war, these soldiers were not acknowledged for their service and bravery for almost six decades after the war. When they were finally recognized, twenty men from the 442nd were awarded the Medal of Honor.