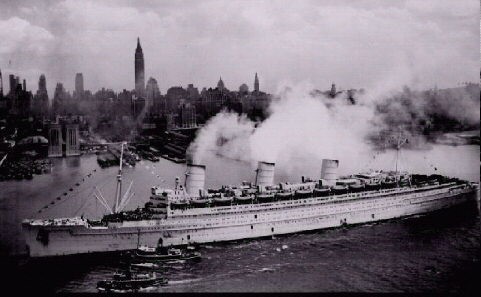 Posted at 15:00h in Uncategorized by admin 0 Comments
7 Likes
Share

Today (Sept. 27th) marks the 75th Anniversary of an important step on the road to D-Day: the departure of the 29th Division for England.

Technically it was only part of the 29th—the 116th Regimental Combat Team—who shipped out on that day three quarters of a century ago. They departed in secrecy, with no fanfare or ceremony. In this unit were hundreds of former National Guardsmen, largely from Virginia, who had been called up into the regular Army in February 1941—while the nation was still at peace. None of the enlisted men yet knew what their destination—or their destiny—would be.

So far in war, the 116th and the rest of the 29th Division had spent the bulk of 1942 in training, in Virginia, Maryland, North Carolina, and Florida. Suddenly in September the officers of the 29th received surprise orders: prepare for deployment.

The men of the 29th, including the famed Bedford Boys and hundreds of others from National Guard units in Virginia, moved to New Jersey, where necessary preparations were hastily made on both the divisional and individual levels. According to the official history of the 29th,

Officially no one was supposed to know that it was the 29th Division shipping out—divisional patches were removed from uniforms, and only the designated shipment number 0550 would appear on official paperwork. But word crept out enough that wives and girlfriends made weekend appearances in and around New Jersey when the division moved to Camp Kilmer, eager to say their goodbyes.

Finally, on Sept. 26th, the 116th moved out of Camp Kilmer for Jersey City, where they boarded the darkened hulk of the Queen Mary. Once a proud and glimmering luxury liner, the Queen Mary and her sister ship Queen Elizabeth had been converted into utilitarian troop transports, stripped of all comforts and indulgences, painted a bleak haze gray. As the men shouldered their A bags and filed aboard, there was no band, no official speeches, no tearful loved ones waving goodbye. They found their assigned berths on the crowded ship and wondered what was to come.

The next morning the ship quietly slipped down the river and to the ocean. Men somberly watched the Manhattan skyline and the Statue of Liberty recede over the horizon. For too many, it would be the last glimpse they would have of their homeland.

The rest of the 29th—the 115th and 175th Regiments—would follow aboard the Queen Elizabeth a few days later. They were not the first division to embark for Europe—the Big Red One (1st Division) was already crossing to prepare for the coming invasion of North Africa. But the 29th would be the division billeted the longest in England, training heavily for the day all knew must come—the Cross Channel Invasion.

The crossing was not to be without incident. The Queen Mary was one of the fastest ships afloat, far faster than any German U-Boat. The threat of a torpedo attack was remote, but not so remote that precautions were not in order, like blackouts and lifeboat drills. Zig-zagging, sudden course corrections to thwart any pursuing submarines, were standard procedure. On October 2nd, not far from the Irish Coast, the Mary collided with the British cruiser HMS Curacao, when a zig-zag maneuver when awry. The Curacao was sliced in two by the bigger ship—80,000 tons vs. 5,000. Some 300 sailors died in the collision, a disaster quietly hushed up until after the war—but the horrified men of the 29th would never forget.

The Queen Mary arrived in England a few days later and the men disembarked. It was the first time most of them had been on foreign soil, and they found a somber nation already at war for two years. Here they would train relentlessly, enduring the demanding duty in hopes of procuring the coveted weekend pass and some R&R. Every 29er would long remember their London overnighters, enthralling sightseeing trips, and slow dances with pretty English girls.

Meanwhile, their superior officers were deciding their fate in utmost secrecy. The plans for an invasion, ultimately codenamed Overlord, would be carefully crafted over the next two years. None of the Blue and Gray Division knew it yet, but the 29th would be key to the plan. They would receive their baptism of fire—and secure their place in history—on a blood-soaked stretch of sand now known as Omaha.