19 Dec Battle of the Bulge: The Last German Offensive of WWII

At the end of 1944, Adolf Hitler took on his last offensive attempt of the war known as Operation Watch on the Rhine. Hitler ordered the German advance towards the River Meuse of the heavily forested Ardennes of Belgium into Luxembourg. Initially, he pulled thousands of German soldiers from the Russian front to take on the operation. Although the battle lasted until the end of January 1945, it proved Allied resistance and strength in a costly defeat against the Germans. 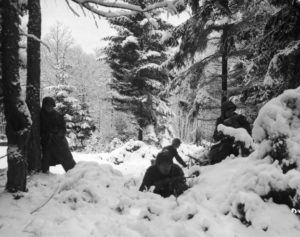 By December 16, the dense forest of the Ardennes had heavy snow and intense fog which caused low visibility for the Americans. The Germans used their infamous blitzkrieg tactics from early in the war to divide the American forces and to turn the focus of the war on the Soviet Union. Due to ambush nature of the attack and the 70 miles stretch of the forest lightly defended by four American divisions, the Germans broke the American front within a day. After the first day, the area appeared as a bulge, thus came the name, Battle of the Bulge, also known as the Battle of the Ardennes. 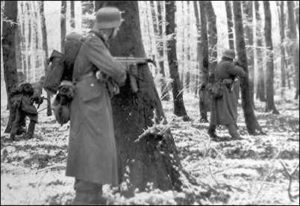 American units fought vigilantly against the Germans at St.-Vith, Eisenborn Ridge, Houffalize, and Bastogne. However, the U.S. suffered the second largest surrender during the battle. An inexperienced division, the 106th Golden Lions, was assigned to hold the line at Schnee Eifel in the Battle of St.-Vith. Under heavy fire and low on ammunition, 6,500 American soldiers were forced to surrender.

The American forces were tested in surprise Christmas-time attacks, but proved resilient and continued fighting. By December 23, the skies cleared, but the battle continued slowly due to ice and heavy snow. Both sides ran low on fuel for tanks and aircraft, especially the German Panzer tanks. Supreme Commander Dwight D. Eisenhower, sent reinforcements into the Ardennes, which included British and Canadian divisions. On Christmas day, General Patton’s 3rd Army stopped German tanks close to the Meuse River. The U.S. First Army attacked from the north of Bastogne and General Patton’s from the south in a counterattack against the German flank. 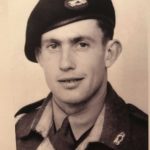 Christmas was delayed for the soldiers given the battle did not end until January 25, 1945. Peter Davies, a British soldier, was sent in from the 1st East Riding Yeomanry, as a part of reinforcements for the American divisions. Mr. Davies bought two bottles of beer, which were shipped to the Ardennes for Christmas. Christmas came a few weeks later though, as Mr. Davies recalls Christmas lunch on January 21st, and their beer being frozen in the bottles.

The surprise Christmas attacks of December 1944 were the last German offensive operation of the war. The battle resulted in approximately, 80,000 American and 100,000 German casualties. With Germany’s defeat and reduction of resources, the Allies and Soviets advanced to Germany, and Nazi Germany surrendered in April 1945.