This President’s Day we look back on the presidency of Franklin Delano Roosevelt, America’s leader through the Great Depression and World War II.

In 1932, almost three years after the Stock Market Crash of 1929, the Great Depression in the United States caused unemployment to increase by approximately 25%. That same year Franklin Delano Roosevelt (FDR) defeated President Herbert Hoover in the election by campaigning for hope when the people of America were desperate for economic changes. He would go one to be the longest reigning president in American history elected to four terms. 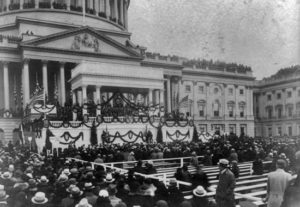 In his first Inaugural Address on March 4, 1933, FDR stated, “a host of unemployed face the grim problem of existence, and an equally great number toil with little return. Only a foolish optimist can deny the dark realities of the moment.” At the start of his presidency, FDR experimented with a series of programs and policies known as the New Deal. The New Deal brought the passage of 14 major laws including the Agricultural Adjustment Act, the Tennessee Valley Authority Act, and the National Industrial Recovery Act. To decrease unemployment, the Works Progress Administration developed public works jobs such as building of bridges, highways, and schools for the unemployed. The New Deal launched a platform of economic measures not only in the late 1930s, but also for government involvement throughout the 20th Century. Although New Deal policies restored a sense of hope for economic prosperity, the economy boomed in the early 1940s because of industrial production of war materials for American involvement in the Second World War.

Before the attack on Pearl Harbor in 1941, FDR carefully navigated American involvement in World War II understanding that the American public overwhelmingly wanted to stay out of World War II. By 1940, Germany swept through Western Europe by invading France, Belgium, Luxembourg, and the Netherlands. Winston Churchill, Prime Minister of Great Britain, personally asked FDR for reinforcements due to the destruction of eleven British destroyers outside Newfoundland. Roosevelt agreed to provide Great Britain with 50 destroyers in exchange for leases of 99 years in the Caribbean and Newfoundland bases. In order to provide greater military aid to Great Britain, the Lend-Lease Act of March 4, 1941 was signed. Even though the U.S. remained out of the war, the Lend-Lease Act allowed for American preparations for war. FDR understood that America needed to be prepared in the event of entering the war, as the nation was not prepared for World War I in 1917. In the first meeting between Churchill and FDR on a ship outside Newfoundland, they compromised on a vision for war aims with the Allies. The official document is known as the Atlantic Charter, which outlines principles for improvements, self-determination, and freedom. Featured on many Allied propaganda posters throughout the war, the “Four Freedoms” stood for freedom of speech and expression, religion, freedom from want and freedom from fear. 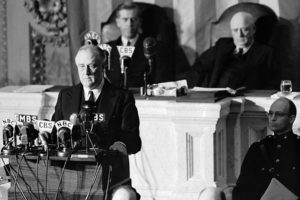 The Japanese surprise attack on Pearl Harbor on December 7, 1941 was the event that led America to declare war on Japan and officially enter World War II. In FDR’s address to the nation on December 8, 1941, he stated, “Japan has, therefore, undertaken a surprise offensive extending throughout the Pacific area. The facts of yesterday and today speak for themselves. The people of the United States have already formed their opinions and well understand the implications for the very life and safety of our nations.” He proclaimed that December 7, 1941 will be “a date that will live in infamy.” On December 11, 1941, Nazi Germany declared war on the United States, which brought America into the European conflict as well.

President Roosevelt adopted a “Germany First” strategy for the war in Europe. Due to Nazi occupation of much of Europe, the Allies needed to establish a second front to assist the Soviets. In 1943, Churchill, Joseph Stalin, and FDR met in Iran for the Tehran Conference to establish a time frame for a secret invasion in France, codenamed “Overlord.” On June 6, 1944, under the command of General Dwight D. Eisenhower, over 150,000 Allied troops landed on five beaches along the Normandy coast. The same day as the invasion in a national radio broadcast, Roosevelt stated, “they will need Thy blessings. Their road will be long and hard. For the enemy is strong. He may hurl back our forces. Success may not come with rushing speed, but we know that by Thy grace, and by the righteousness of our cause, our sons will triumph.” Through D-Day, the Allies forced the German troops out of France over the course of two months, which left Germany fighting the Soviet Union in the East and the Allied forces in the West—the two-front fight that the Allied leaders envisioned. 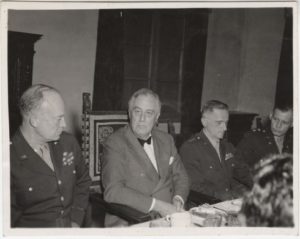 By Roosevelt’s fourth term beginning in 1945, he had experienced a grueling presidency not only in the war efforts, but also in domestic policies. But he was the leader that America needed through World War II and the Great Depression, as seen through the American public’s faith in his leadership by electing him to four terms. Unfortunately, FDR did not live to see the fruits of his efforts with the economy or WWII as he suddenly died due to a cerebral hemorrhage just a few months into his fourth term in office.

Although Roosevelt’s policies with the New Deal are controversial, his diligence towards new laws provided a bright future for American democracy and sustainment in economic growth for the U.S. Roosevelt’s legacy is captured by his own words in his third Inaugural Address where he said: “Most vital to our present and to our future is this experience of a democracy which successfully survived crisis at home; put away many evil things; built new structures on enduring lines; and, through it all, maintained the fact of its democracy.”