Our blog has been a little too inactive of late; but what better time than the 75th Anniversary year to use this format to pay tribute and raise awareness! From now until “The Final Salute” on June 6, look for more posts on the history of WWII and the exciting events at the National D-Day Memorial! –JDL

Rhode Island native Jack Edward Rowe was a Coast Guard reservist who enlisted early in the war. Placed in a gun crew, Rowe served aboard the USS Dickman in 1943 and ’44. The plucky transport served in the invasions of Sicily and Italy, before setting sail for Britain to train for what Rowe called “The Big Show”—the long-awaited Cross-Channel Invasion. 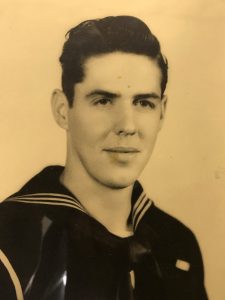 For most of ’44, Rowe kept a typewritten diary of his training, his leisure activities, and a brief romance with a British girl. Rowe typed his recollections, he joked, because his handwriting was almost indecipherable. But in fact he seemed to be an artistically talented young man, decorating his own seabags and being asked to do so for others.

On D-Day, Rowe and his shipmates served off of Utah Beach, loading invasion troops into landing craft and going “over the side” to run them to shore. In his last diary entry, made at 0030 (12:30 AM) before the landings, he confidently predicted that he would return safely from the invasion.

June 6, 1944, 0030: …called to chow down in 15 minutes. I have been up since 1130, put on some heavy underwear because it is cold out. It was rough and windy. Minesweepers are sweeping the way and dropping buoys as they go. The sky is being lighted up by constant flashes about two points off the starboard bell. My shipmates are climbing out of the pits, some noisy as usual; some of the noisy ones are very quiet; others talking; making speeches in a kidding way; the heavy sleepers weaving around the compartment trying to wake up. It’s hard to tell who was putting on a show to cover up his feelings, but I think I spotted a couple. Most are glad the time is here at last. It has been tiresome waiting month after month for something you know it was bound to happen. Well, I have a few little odds and ends to do before I go over the side, so I guess I will be off now to see history made and the biggest show of any war yet of its type. When I come back I will have a lot to write about. As to coming back there was no doubt in my mind but that I will.

Sadly, Jack’s final prediction was not to come true. 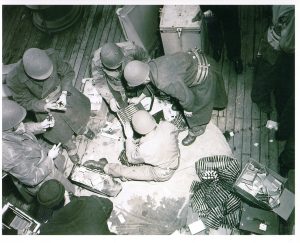 Anti-aircraft crew aboard the USS Dickman prepare for the invasion in this photo from the Rowe collection.

Jack Rowe was one of two crewmen of the Dickman to perish in the invasion, a victim of shrapnel that struck the vessel. Rowe was still alive when transported to another ship for evacuation, but he died of his wounds soon afterwards. He is buried in England, although for years his mother did not know where.

The family of Jack Rowe donated his artifacts to the National D-Day Memorial Foundation, choosing us as the repository for the important collection so that we could keep Jack’s legacy alive. The collection consists of a framed assemblage of his ornately decorated seabags, fourteen photos taken by crew members of the Dickman, (some perhaps on D-Day itself), and Rowe’s original typescript diary.

The Rowe artifacts form an important component of our growing collection. The story of the US Coast Guard at D-Day is little known and too often overlooked. But this impressive collection will do much to help us pay tribute to Rowe and the other Coastguardsmen who served on June 6, 1944; especially those who, like Jack Rowe, gave their lives on that fateful day.