Our last blog post looked at a couple of messages from top commanders—Bernard Montgomery from Britain and Harry Crerar from Canada—to the men about to embark upon the great invasion. The idea was to inspire the men to do something completely contrary to their natural survival instincts: run across those beaches or jump out of those airplanes. Like the better known “Order of the Day” by General Eisenhower, these documents were taken to heart by the men who read them, and often kept as cherished souvenirs of the momentous occasion. 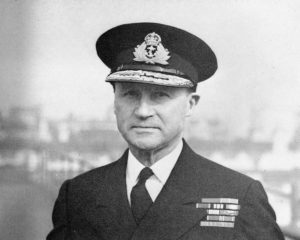 The ships at sea were not left out of the wave of “pep talks.” British Admiral Bertram Ramsay, in overall naval command of the invasion, issued his own declaration to the “Masters of Merchant Vessels” involved in Operation Overlord. Often overlooked, the role of the merchant fleets from the US, Britain, and other Allied nations was essential in keeping the invading forces adequately supplied and making the assault a success.

Personal message from the allied naval commander-in-chief to the masters of merchant vessels taking part in operation overlord:

We are about to embark on the most critical operation of the war, the invasion of German occupied France, for which we have been waiting and preparing since the British Expeditionary Force was evacuated from Dunkirk. The invasion is being undertaken by an Allied Force in which all arms and the merchant navies will play their part.

The ships that you command are amongst those selected for this vital task and the manner in which each is conducted will have a direct bearing on the campaign ahead. The gaining of a bridgehead by the Allied Expeditionary Force requires the strongest available support 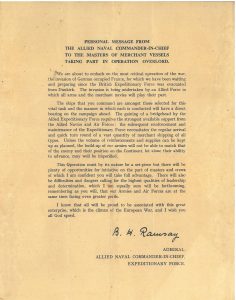 from the Allied Navies and Air Forces. The subsequent reinforcement and maintenance of the Expeditionary Force necessitates the regular arrival and quick turnaround of a vast quantity of merchant shipping of all types. Unless the volume of reinforcements and supplies can be kept up as planned, the build-up of our armies will not be able to match that of the enemy; and their position on the Continent, let alone their ability to advance, may be imperiled.

This Operation must by its nature be a set-piece but there will be plenty of opportunities for initiative on the part of masters and crews of which I am confident you will take full advantage. There will also be difficulties and dangers calling for the highest quality of leadership and determination, which I am equally sure will be forthcoming, remembering as you will, that our Armies and Air Forces are at the same time facing even greater perils.

I know that all will be proud to be associated with this great enterprise, which is the climax of the European war, and I wish you all God speed.

Finally, let’s explore another memorandum Eisenhower, Supreme Allied Commander, issued to his troops. If the message given to his troops in his Order of the Day was “You can do it!” the subtext of this lesser-known order was “Behave yourself while you’re doing it!” The purpose was more practical and less inspirational than the other message: the invasion was also the start of the Allied occupation of Europe, and the civilian population must be treated appropriately.

You are soon to be engaged in a great undertaking – the invasion of Europe. Our purpose is to bring about, in company with our Allies, and our comrades on other fronts, the total defeat of Germany. Only by such a complete victory can we free ourselves and our homelands from the fear and threat of Nazi tyranny.

A further element of our mission is the liberation of those people of Western Europe now suffering under German oppression.

Before embarking on this operation, I have a personal message for you as to your own individual responsibility, in relation to the inhabitants of our Allied countries.

As a representative of your country, you will be welcomed with deep gratitude by the liberated peoples, who for years have longed for this deliverance. It is of the utmost importance that this feeling of friendliness and goodwill be in no way impaired by careless or indifferent behavior on your part. By a courteous and considerate demeanor, you can on the other hand do much to strengthen that feeling. 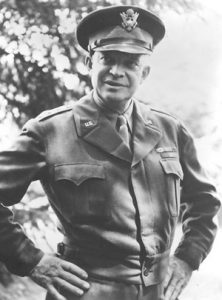 The inhabitants of Nazi-occupied Europe have suffered great privations, and you will find that many of them lack even the barest necessities. You, on the other hand, have been, and will continue to be, provided adequate food, clothing and other necessities. You must not deplete the already meager local stocks of food and other supplies by indiscriminate buying, thereby fostering the “Black Market” which can only increase the hardship of the inhabitants.

The rights of individuals as to their persons and property must be scrupulously respected as though in your own country. You must remember always that these people are our friends and Allies.

I urge each of you to bear constantly in mind that by your actions not only you as an individual, but your country as well, will be judged. By establishing a relationship with the liberated peoples, based on mutual understanding and respect, we shall enlist their wholehearted assistance in the defeat of our own common enemy. Thus we shall lay the foundations for a lasting peace, without which our great effort will have been in vain.

The men awaiting the invasion aboard troopships or at airfields could not know what the next day would hold. But with the inspirational messages of their commanding officers received, they knew one thing: the top brass had every confidence in their chances of victory.