The fire that has devastated Notre Dame Cathedral in Paris has broken the hearts of the world; and we at the National D-Day Memorial share the shock and dismay. Many of our staff and volunteers have visited the majestic edifice; and, serving a mission which naturally gives us a heartfelt connection to the people of France, we join in mourning the damage done to a global treasure.

As investigators search for the cause of the fire and restoration teams take stock of what was lost and what survived, it’s worth taking a few moments to consider how close Notre Dame came to destruction 75 years ago. The 12th Century cathedral had been threatened many times in the past—by the French Revolution or the shelling of Paris in the Franco-Prussian War, for instance. But the German occupation of Paris beginning in 1940 brought the inspiring cathedral as close to annihilation as any other time—until this week.

Paris under German control was a nightmare for the cosmopolitan city, with oppression, plundering, and deprivation at the hands of the Nazi occupiers. 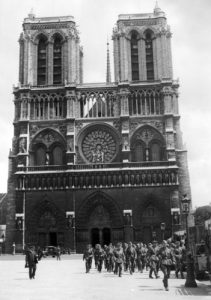 However, unlike too many other European cathedrals, the gothic masterpiece on the Île de la Cité emerged relatively unscathed. Some of the stained glass and other treasures were removed to protect them from aerial bombardment or German plundering, but throughout the war, Notre Dame continued as both a church and as a popular tourist attraction for those who made their way to Paris. A church, after all, serves a mission higher than contemporary events, and so masses, baptisms, marriages and funeral services all continued.

However, after D-Day, as Allied forces broke out of the Norman hedgerow country and began their race to liberate Paris, orders from Hitler himself nearly doomed the cathedral and the city. Historian Alex Kershaw (who will be our keynote speaker for Memorial Day on May 27) tells the story in his compelling book “Avenue of Spies:”

Paris was on the brink. On August 22, General von Choltitz (in command of the occupation of Paris) received an order from Hitler: “Paris is to be transformed into a pile of rubble. The commanding general [Choltitz] must defend the city to the last man, and should die, if necessary, under ruins.”

Later that day Choltitz talked with General Hans Speidel, whose office had passed on Hitler’s order to turn Paris into a vast charnel house. “I thank you for your excellent order,” Choltitz told Speidel.

“The demolition order, of course. Here’s what I have done. I’ve had three tons of explosives brought into Notre-Dame, two tons into the Invalides, a ton into the Chambre des Députés. I’m just about to order that the Arc de Triomphe be blown up to provide a clear field of fire.”

“I’m acting under your orders, correct, my dear Speidel?”

“It was you who gave the order, right?”

“It wasn’t me,” Speidel replied angrily, “but the Führer who ordered it!”

Choltitz shot back: “Listen, it was you who transmitted this order and who will have to answer to history.” Choltitz calmed down. “I’ll tell you what else I’ve ordered,” added Choltitz. “The Madeleine and the Opéra will be destroyed. As for the Eiffel Tower, I’ll knock it down in such a manner that it can serve as an antitank barrier in front of the destroyed bridges.”

Speidel suddenly realized that Choltitz was not being serious. He had no intention of being remembered by history as the destroyer of Paris.”

Choltitz indeed surrendered Paris to the Allied forces soon after, relatively intact. His motivations were likely more selfish than historically-minded—he had no desire to face the retribution of the French people had he carried out Hitler’s destruction order. Regardless, his decision saved the architectural and artistic treasures of Paris, including Notre Dame. The cathedral suffered some damage from gunfire in the fight to liberate the city, but given what could have been the people of Paris were extremely grateful for the survival of the revered cathedral.

On August 26th, 1944, Notre Dame hosted a special mass of thanksgiving to celebrate the liberation and preservation of Paris. Generals Charles de Gaulle and Philippe Leclerc were in attendance at the Te Deum.

Notre Dame has survived its second World War. We here at the National D-Day Memorial join the rest of the world in lamenting the fire of yesterday, but have little doubt that the cathedral which has witnessed so much history will rise again to see better days.