One of the tougher parts of working at the National D-Day Memorial is saying goodbye. We all know the WWII generation is departing us rapidly, and many of our friends and supporters who wore a uniform in the war have answered their final role call. But we also often—too often—must bid farewell to faithful volunteers, with lumps in our throats and hearts full of gratitude. Such is the case this week, as we say goodbye to longtime D-Day volunteer Hugh Scrogham of Lynchburg.

Hugh was a lifelong educator, devoting his career to the administration of Lynchburg College, where many folks also mourn his passing.

Hugh died last Tuesday after a mercifully short time in hospice. His declining health meant he had not been able to volunteer much in recent months, but for many years before he had perpetually been among our top five volunteers in terms of hours worked.

Furthermore, Hugh’s service was a specialized one. He worked in the Memorial’s archives, cataloging artifacts and building our collections. As items were donated to NDDMF, Hugh would painstakingly enter them into our 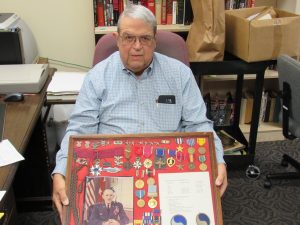 Hugh Scrogham shows some of the items he purchased for the National D-Day Memorial archive.

collections database, a frustratingly persnickety program requiring special skill and patience. In addition, Hugh sought and negotiated the donation of many significant collections. For instance, he took the lead in having a unique collection of Allied propaganda leaflets donated several years ago, a priceless glimpse into one little-known aspect of WWII.

Hugh also was a generous donor to the Memorial. Each year, he wrote a check designated for the purchase of archival needs—storage boxes, acid-free folders, even computer equipment and scanners to digitize photos. A gun safe and a fireproof archive cabinet were provided by his generosity. I have worked for museums my entire career, and know many museum professionals. They are all amazed (and jealous) when I would tell them of that aspect of Hugh’s support. Donors don’t typically think about the costs of archival boxes. But Hugh saw the need and met it, year after year.

And his support didn’t stop there. Hugh was a life-long collector of WWII artifacts, amassing an extensive personal collection of items from nearly every nation in the war. Over the past few years, Hugh has been donating these priceless and instructive items to the Memorial—hundreds of firearms, uniforms, medical supplies, aviation equipment, wartime posters, documents, medals, memorabilia, photos. Hugh’s legacy will become the core of our future museum/ education center, which will house one of the most significant and impressive World War II collections on the East Coast. And Hugh’s generosity will have made it largely possible.

Hugh, our very good friend, rest in peace. And rest assured that you made a difference, and that your legacy will continue to inspire and teach coming generations. –John