How many people died on D-Day? Who were they?

These are questions we at the National D-Day Memorial are frequently asked. Sometimes it’s a relative doing genealogy. Sometimes it’s representatives of the military or a government office. So far this year alone, representatives from New Jersey, Texas, Massachusetts, North Carolina, Pennsylvania, California and Wyoming have requested lists of the heroes of D-Day from their states. We’ve gotten research questions from many media outlets and at least four foreign nations. These folks contact us because we are the keepers of that information.
But we don’t keep the info to ourselves. In fact, we’ve just published it, providing definitive, if not final, numbers to answer the questions above. 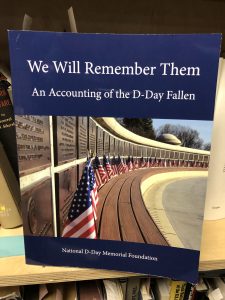 “We Will Remember Them: An Accounting of the D-Day Fallen” published in May by the National D-Day Memorial, is the most authoritative list of Allied fatalities ever compiled.

The new publication, released in time for the 75th Anniversary of D-Day in June, identifies 4,414 men, including 2,501 Americans, who gave their lives on a single day of WWII.

The book fulfills a long-standing ambition of the Memorial staff and board. Nearly two decades ago, the National D-Day Memorial Foundation set the goal of identifying all Allied personnel killed on June 6, 1944 in the invasion of Normandy. Led by Carol Tuckwiller, the researchers in the “Necrology Project” painstakingly sifted through burial records, after-action reports, personnel records, unit histories, and other sources to honor the D-Day fallen. While the project has never been considered finished and research continues, the Memorial’s Necrology database remains the most complete accounting of the D-Day fallen anywhere in the world. 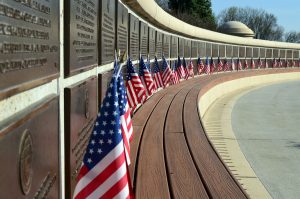 Eventually 4,414 names were identified and enshrined in bronze plaques on our Memorial’s Necrology Wall. However, until now the full accounting has never been published, the findings never made openly available to researchers or the general public.

For the 75th Anniversary of D-Day, a special publication titled “We Will Remember Them: An Accounting of the D-Day Fallen,” is finally available. In addition to listing all 4,414 Allied fatalities by nation, the book also identifies 2,501 Americans by their state of origin, and supplements this roll call of heroes with primary source documents to tell more fully the story of valor, fidelity, and sacrifice which was D-Day. Photos of the many of the men are also included.

One name in the book was only recently uncovered. John C. F. Onken of Peotone, Illinois was born in the US to German parents. The family returned to Germany in 1914—just in time for the First World War to erupt. Onken’s father was drafted into the German army and died in battle in France. Years later, John and his brother returned to the Midwest as teenagers, living with an uncle in Iowa and working as farmers. They received naturalized American citizenship in the 1930s, and both enlisted in the army of their adopted homeland when war broke out.

It is often overlooked in the histories of D-Day, but some of the first Allied soldiers to land on French soil by sea on June 6, 1944 were American cavalrymen, tasked with clearing two small islands in the English Channel. The St. Marcouf islands stood astride the approaches to Utah Beach; German troops had been spotted there before D-Day. Allied planners therefore hastily assigned two squadrons of the 4th Cavalry Group to land two hours before dawn and clear the small islands, in case any German artillery could threaten passing landing craft or radiomen could give advance warning of the invasion. 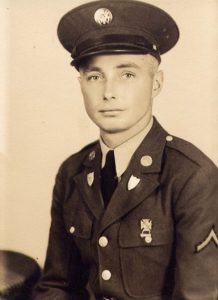 While no Germans were found on the islands, the beaches had been heavily mined. Seventeen men were wounded by landmines and two men killed—heavy losses for a force of only 132 men. One of the men killed was John Onken.

Despite being one of the first Americans to die in the seaborne invasion, Onken’s name was not originally added to the Memorial Wall due to a discrepancy in military records. Recent research for our book, however, confirmed last year that he did indeed die on June 6th; and so deserves to be honored alongside 2500 other Americans who died on D-Day. A plaque bearing the name of John Onken was dedicated on Memorial Day; his name appears in the book as well.

The National D-Day Memorial exists, after all, to pay tribute to those who gave their lives to start the liberation of Europe. This special publication helps to honor their memories and remind readers of the cost of freedom.

The limited-edition book is available through the National D-Day Memorial gift shop or online through our website.