02 Jun THE PORTSMOUTH AREA AT THE TIME OF D-DAY (by Andrew Whitmarsh, curator of The D-Day Story, Portsmouth, England)

Andrew Whitmarsh is an overseas friend of the National D-Day Memorial. As curator of the D-Day Story, a world-class museum in Portsmouth England, Andrew and our staff have corresponded for years. Recently we asked him to let us know about his city in the war, a crucial marshaling area for the invasion. We are honored to share this cross-Atlantic report:

Seventy-five years ago, the city of Portsmouth in the United Kingdom was at the centre of the preparations for D-Day. Together with much of the rest of the south coast of England, the region would act as the launch pad for Allied forces that would land in Normandy on D-Day and over the subsequent days and weeks. 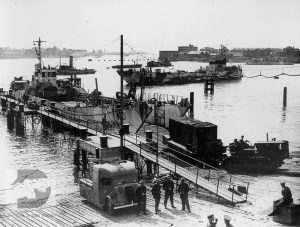 What was Portsmouth like in the summer of 1944? The UK had been at war for over four and a half years. As was the case throughout the country, the war affected every aspect of life. German bombing had destroyed or badly damaged around one in five houses in the city, and 930 people had been killed in air raids. The city’s pre-war population of 260,000 had roughly halved in wartime. Most people’s work related in some way to the war effort, whether they were in the armed forces, working as a civilian in a supporting role, or had taken over a job left vacant by someone who had gone off to war. The necessities of everyday life such as food and clothing were not freely available due to rationing.

Some of the area’s links to D-Day went back months or even years. In 1938 the Inter-Services Training and Development Centre had been established in the city, in the Eighteenth Century fortification of Fort Cumberland. This small tri-service organisation developed early ideas for amphibious operations, including originating the concept of the Landing Craft, Tank or LCT (a type of craft that was essential on D-Day).

For several years before 1944, Royal Navy shore bases on nearby Hayling Island (collectively known as HMS Northney) had been used for the initial training of landing craft crews. Sections of the Mulberry Harbours (artificial harbours) were constructed in the first half of 1944 at sites in Portsmouth and Gosport (a town on the opposite side of Portsmouth Harbour). The components of the artificial harbours would be towed over to Normandy immediately after D-Day. 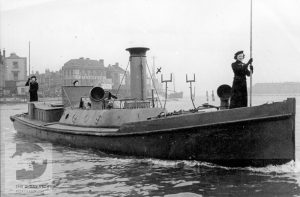 For several months before D-Day, thousands of Allied troops (the largest number were British and Canadian) had been gathering in 18 specially prepared camps a few miles inland from Portsmouth. Most camps were located in woods to hide them from enemy aircraft. Each held around 1-2,000 troops and several hundred vehicles. Routes were identified from these camps to the points in Gosport and Portsmouth where troops would load onto the ships and landing craft that would take them to Normandy.

The Portsmouth-Gosport area was known as Marshalling Area A. Also nearby were Marshalling Areas B (the New Forest) and C (Southampton). On 31 May 1944, these three areas together held 86,000 Allied troops. On that date the force began loading. Hundreds of ships and landing craft waited for D-Day in the Solent, the sheltered anchorage between the mainland and the Isle of Wight. Portsmouth’s naval dockyard and naval bases in Gosport supported these ships and supplied them with anything from food to shells for ships’ guns. 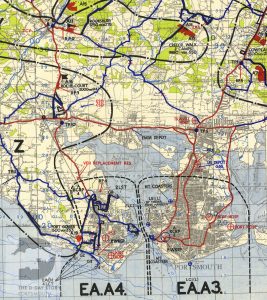 A detail from a map showing embarkation points in Gosport (left) and Portsmouth (right), with Portsmouth Harbour between them. The red markings near the top of the image are some of the camps where troops waited before embarking. Image: The D-Day Story, Portsmouth. 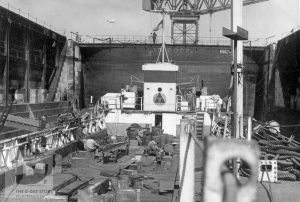 While all these preparations were taking place, the top Allied commanders met several times a day at Southwick House, just north of Portsmouth. This stately home was the headquarters of the Allied naval commander, Admiral Sir Bertram Ramsay. The Supreme Allied Commander, General Dwight Eisenhower, had his forward HQ in a nearby wood. The Allied ground forces commander, General Sir Bernard Montgomery, was based in a house not far away. High on the commanders’ list of concerns was the weather. Conditions for 5 June were forecast to be so poor as to put the landings at risk. In a series of meetings at Southwick House, Eisenhower took the decision to delay the operation by 24 hours, and then to launch it on 6 June to take advantage of an improvement in the weather that was predicted by Allied meteorologists. This proved to be the correct decision!

After D-Day, the flow of Allied troops over to France continued for months. By 9 August 1944, just over two months later, the forces that had departed from Portsmouth-Gosport totaled 171,922 troops and 42,926 vehicles. Some of the landing craft brought back from France the wounded or prisoners of war. Ahead of D-Day, local hospitals had been cleared of normal patients so that they could receive casualties returning from Normandy. More lightly wounded personnel were taken to local stations and moved by train to hospitals further north. Prisoners of war were also brought back to the area, and held in local camps. 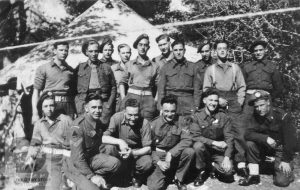 Troops of 1st South Lancashires in a camp just north of Portsmouth shortly before D-Day. They landed on Sword Beach on 6 June 1944. Image: The D-Day Story, Portsmouth.

Several local airfields also played a significant role in the campaign. The shore base of HMS Daedalus at Lee-on-Solent was the busiest Tactical Air Force airfield on D-Day. Its aircraft flew in support of the Allied naval and ground forces, including spotting for the guns of warships. To the east of the city, a cluster of airfields near Chichester were used by ground-attack aircraft including RAF Typhoon fighter-bombers.

These many connections are the reason why The D-Day Story is located in the city of Portsmouth. See the museum’s website to find out more about it. In the D-Day on Your Doorstep section of the website you can learn more about places in the Portsmouth area and the rest of the UK that are connected to D-Day. https://theddaystory.com.