12 Jul “MOTOR TRUCKS WITH THE PIECES HOOKED ON”

One of the greatest changes in the American military between World War I and World War II was, of course, the rapid increase in mechanized power. While trucks, tanks, airplanes, and other powered vehicles were an obvious factor in the American army in 1917-18, the full impact of the internal combustion engine on military maneuverability was only beginning to be felt. 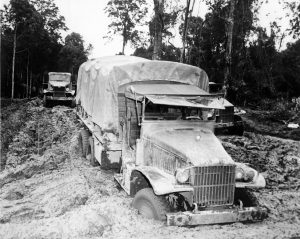 US Army truck slogging through mud as part of the famous “Red Ball Express,” 1944

During the interwar years the pace of mechanization only increased, much to the consternation of older soldiers, especially in the horse-loving cavalry. But no one could deny that things were changing. The 1939 Army field manual for the 75-mm artillery piece specified it would be “horse- or truck-drawn;” the 1945 edition called it “truck- or tractor- drawn.” The venerable old army mule and dashing cavalry horse weren’t completely gone, but they’re ranks had definitely been thinned.

Indeed, the US Army in WWII (and to a lesser extent the British) became the first truly mechanized military force in human history. Contrary to modern perceptions of the war, this was not universal among other belligerents. Even the vaunted and much feared Blitzkrieg army of Nazi Germany was, beyond the tank forces at the spearhead, largely horse-drawn.

Early motorized transport of an army was still an unpredictable, costly, and exasperating experience. One hundred years ago this summer the Army set the goal of crossing the continental US with a convoy of trucks to gauge the effectiveness of the motor pool and the American road system. They made it, but after delays and breakdowns revealed the shortcomings of the technology and the roads that supported it. One young officer was particularly frustrated by the difficulties of the trek. His name was Dwight Eisenhower. Decades later President Eisenhower would remember that 1919 convoy as he worked to create today’s Interstate Highway System. 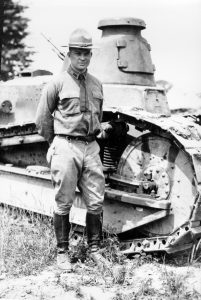 Young Eisenhower beside an early tank.

This rapid mechanization of the army and the vexations associated with it were reflected in a lampoon of the Army Song “The Caissons Go Rolling Along.” The “Parody Field Artillery Song” even received some official sanction when it was printed in the “Army Song Book,” compiled by the Adjutant General’s Office in collaboration with the Library of Congress, and published by the order of the Secretary of War in 1941. The author was not listed, but he no doubt had gotten his hands greasy on an obstinate army truck a few times. The amusing lyrics beautifully capture the spirit of an army convoy crossing the country on peacetime maneuvers:

Over hill, over dale, motorized from head to tail,
With the caissons and hosses all gone.
Stop to fix up a flat, or to get the Captain’s hat,
Motor trucks with the pieces hooked on.

CHORUS:
Then it’s high, high, see! The field artillery,
Sound off your Klaxon loud and strong! (SQUAWK, SQUAWK!)
No more we’ll go with a team in low
If our motors keep buzzin’ along.

See the red guidon stuck on the off side of a truck,
With the caissons and hosses all gone.
Gone are nosebags and grass, as we feed with oil and gas
Motor trucks with the pieces hooked on. CHORUS

By the roadside we stop for some hot dogs and pop
With the caissons and hosses all gone.
Now we halt after dark and at tourist camps we park
Motor trucks with the pieces hooked on. CHORUS

Hear the bold bugles blow, amplified by radio,
With the caissons and hosses all gone.
Shove ‘er guy into high as the green lights flicker by
Motor trucks with the pieces hooked on. CHORUS

If our engines go dead won’t our faces all be red!
With the caissons and hosses all gone.
For the foeman, of course, will yell at us “Get a Horse!”
Motor trucks with the pieces hooked on. CHORUS 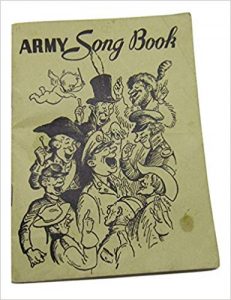 Despite the songwriter’s sarcasm, it was soon made evident that army personnel of the hooved variety would play a greatly diminished role in the Second World War. Meanwhile, the deuce-and-a-half truck and Sherman tank played their vital part in securing victory—occasional flats and blown head gaskets notwithstanding.