15 Aug A Trip to the Imperial War Museum, London

In July, National D-Day Memorial Director of Education John Long visited England to participate in an international conference marking the 75th Anniversary of D-Day. He also met with representatives of British museums to discuss collaborative efforts crossing the Atlantic, including the Imperial War Museum in London. Below is his review of his visit. 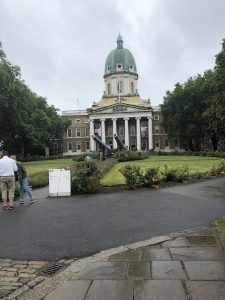 Approaching the Imperial War Museum in the Lambeth section of London, the visitor is immediately reminded of the theme of this world-renowned institution: two immense naval guns stand out front, bearing witness to the days when “Britain Ruled the Waves.” The structure that houses the museum, however, tells a different story. The venerable old building once was the Bethlem Royal Hospital for the treatment of the insane in London—Bedlam, it was called by the locals. Inside the visitor experiences extensive and fascinating exhibits on the what might be called the greatest example of human insanity: war.

Like the National D-Day Memorial, the IWM doesn’t exist to glorify warfare, but to record the inescapable historical significance of Britain’s modern conflicts, and to pay tribute to the ones who served and sacrificed to preserve the free world. Concentrating on British military history since World War I (the museum was founded in 1917), the wide-ranging exhibits provide a thoughtful and intriguing look into the past.

Perhaps most impressive is the expansive gallery detailing the history of the First World War, revitalized and opened for the recent centennial of that crucial moment in history. The American visitor—for whom World War I is remembered as a relatively brief and low-cost affair, a prequel to a more painful war to come—will be surprised at the global perspective of an underappreciated conflict. 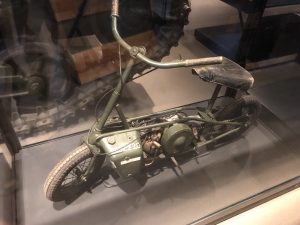 An ingenious British folding motorbike, used by paratroopers in Normandy.

At the time of my visit, a major companion exhibit on World War II was in development. It will rival in scope and significance the WWI gallery, but of course it lies in the future. This meant the World War II displays were less extensive than they will be, but they still impressed. Information on D-Day itself was especially well-presented and informative, with artifacts that admittedly provoked a bit of envy in a counterpart from Virginia. A folding Welbike motorcycle, used by British paratroopers, and a small bulldozer (landed by glider to clear airfields in Normandy) were especially impressive. Elsewhere, Gen. Montgomery’s command car and a small boat used in the Dunkirk evacuation also bore witness to the past. The IWM’s highly moving treatment of the Holocaust reminds the visitor of painful history that must never be forgotten. 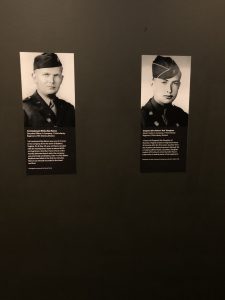 A temporary exhibit in an upstairs gallery made a surprising local connection. Several months ago, the D-Day Memorial was contacted by curators of the IWM to request photos of two area veterans: our founder Bob Slaughter, and Ray Nance of Bedford, one of the storied Bedford Boys. We were happy to oblige and put the curator in touch with Nance’s family. The photos were to be used in an exhibit of Robert Capa’s iconic D-Day photographs. However, Capa himself was not the focus of the exhibit. IWM made the fascinating decision to use Capa’s images to illustrate first-hand accounts of D-Day by several combat veterans, including Slaughter and Nance. The result was again a thoughtful and informative way to preserve the history of that crucial day.

Other exhibits captured the story of more recent wars—there is a crumpled car from a 2006 suicide bomb attack in Baghdad, and even a piece of the World Trade Center. In a balanced approach, several pieces of artwork are exhibited throughout the museum with thought-provoking anti-war messages. 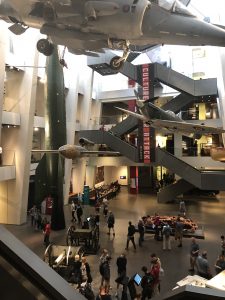 The Imperial War Museum in London is only one of several facilities operated by the organization. I was not able on this trip to visit museums in Manchester or Duxford, the HMS Belfast, or the celebrated Churchill War Rooms. But what I saw was a reminder that the National D-Day Memorial is certainly not the only place preserving history to inform the future. We look forward to further partnerships with our friends across the pond in the future.